"How could he think we are Scottish? We speak understandable English, don't drink Irn Bru, don't smell, don't wear skirts, have jobs and aren't off our faces on crack."


There is a reason I never buy tickets from touts and this game summed up exactly why. You couldn't argue with the price - £10 to watch Champions League football even if it was between Romania and Scotland's champions. But the bloke doing the selling made a right pigs ear of things, sending three of us into the home end and giving me a ticket in with the Rangers fans.

This was not what I wanted. Forget the stringent security checks that meant showing passports and goodness knows what else to get into the away end. Forget the fact that at half time the fans were teargassed, ripped up seats and fought the police. I didn't want to be in there for one simple reason - I'm not bloody Scottish.

Quite how the chap selling the tickets couldn't understand that is beyond me. We spoke understandable English, dressed well, clearly had jobs and weren't high on crack. Yet he still managed to get confused enough to send me in with the sweaties. It was quite clear I wasn't getting in through the turnstile into the home end given my ticket was in with the jocks but thankfully a steward ignored every single rule of ground safety and simply opened up the exit gate to let me in. That was at least one fan in the ground who didn't count towards the attendance then.

Unirea Urziceni had been forced to play their Champions League games 25 miles away from their home ground at Steaua Stadium, home of Steaua Bucharest and Romania's national team as their home ground only held 7,000 and fell short of UEFA's standards. As luck would have it, we were in Bucharest as part of a mammoth train trip from there through to Chisinau in Moldova and finally to Kiev, knocking off three countries in a week.

If you can imagine the most horrible former Soviet place with bland concrete buildings and stray dogs roaming everywhere, then you have Bucharest. This impression probably wasn't helped by the fact that for the three days we were there it was solid rain adding to the grimness but it really was grey. If you measure a place in good places to drink, we only found a couple of them - one being the traditional set up in this part of the world of a tent in a park - but at least the beer was cheap and quite drinkable.

Steaua Stadium is far out of the city centre which meant a taxi ride to reach it. Once there, it was through one set of security checks to enter the car park where we found a hotdog even bigger than Hartlepool United's famous effort that is larger than a mans head, and then another security check to go through the turnstiles (unless of course you get let in an exit gate).


The stadium itself was three uncovered stands of red and blue seats and one main stand with a roof and some executive boxes. With the rain hammering down, it meant we were in for a very wet evening. It was like a Taylor Report devotees worst nightmare inside - yes, it may have been all seater but rather than sit on the seats, everybody stood on them. Perhaps an idea for a protest for safe standing in England?

Buying from the hotdog stand outside proved to be a genius decision given there were no facilities in the ground to purchase anything from. Some enterprising locals showed the sort of initiative that will get you a long way in Dragons Den at half time by bringing their own bottles of Pepsi in and then selling cups of it from a small table. It was good to see the idea of capitalism, trade and entrepreneurship thriving in a former communist country.

The game itself was pretty woeful. Dan Petrescu prowled the sidelines in his role as Unirea manager but both sides seemed to treat it as an away game which I suppose technically it was. Those "home" fans who had made the journey to Bucharest weren't particularly impressed when Lee McCulloch gave Rangers the lead with less than 15 minutes remaining but an absolutely stunning strike from Marius Onofras with two minutes left earned them a 1-1 draw.

That was our cue to leave to avoid being stuck with the jocks in the ensuing rush which would probably turn nasty given what we'd seen at half time but we made a critical error in jumping in a taxi without negotiating the price first, which meant that the journey back to the city centre cost us a whopping six times what it had to get there. Ouch!

As for the rest of the trip, Bucharest offered a few interesting sights the main one of which was the Palace of Parliament. Built by the countries former dictator Nicolae Ceaucescu, he bulldozed 30,000 residencies, 30 churches and six synagogues to create the heaviest building in the world featuring one million cubic metres of marble and 3500 tonnes of crystal. You really have to see it to appreciate just how big it is and it shows how much of a mental case Ceaucescu was to create such a monstrous building when his people were living in poverty.

We spent just a day in Chisinau which was just as well as there was little to do here other than drink and eat. So poor is Moldova that we were able to pick up a good bottle of champagne for £2.50 and after that it was onto Kiev, easily the best city of the trip.

While there we visited Independence Square, scene of 2004's Orange Revolution, the famous St Michael's Cathedral with it's gold domed roofs and after attempting to get a look at Lobanovsky Dynamo Stadium, we managed to bribe the security guard to the tune of £8 to let us enter and have a look at the home of Dynamo Kiev.

Although dark, it's setting in the middle of a park was quite quaint and the floodlight pylons were a particular highlight, being massive things that reached into the sky, outdwarving the tiny stadium. It was oval shaped despite not having a running track and bizarrely didn't feature any sort of roof, not even over the main stand. The gates outside were more like Admiralty Arch than the entrance to a football stadium which made it seem rather grand. It would have been nice to see a game there, but not with a ticket bought from a tout. No sir, I've learnt my lesson on that one. 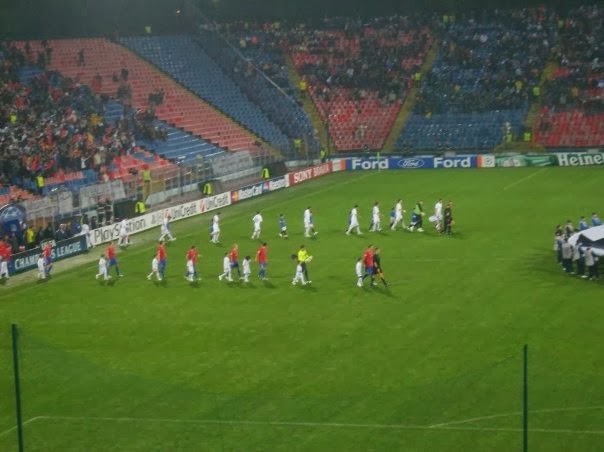