"Why am I drinking so quickly? To remove the taste of that dead fish's head I've just eaten. It isn't working."


In March this year, Britain's Foreign Secretary Boris Johnson was telling anyone who would listen that English fans travelling to the World Cup in Russia wouldn't be safe, comparing the tournament to the Berlin Olympics of 1936 and Vladimir Putin to Adolf Hitler.

"This is what happens to you if you decide to support a country with a different set of values (to Russia). You can expect to be assassinated," said the man who is meant to represent Britain on the world stage.

Then, a mere week before the competition began, a Foreign Affairs Committee report warned of the very real dangers of "intimidation, hooligan violence and anti-British hostility." You may therefore be wondering how am I alive to write this blog on part one of our trip to Russia.

Mr Johnson of course has a long and storied history of speaking complete and utter bollocks on all manner of issues, usually plastered across the side of a big red bus. Meanwhile, our MPs in general aren't exactly known to be the sharpest tools in the box, especially when the Shadow Home Secretary wants to pay new police officers £30 a year or the Trade Secretary reckons that a new deal with the EU will be the easiest in history.

I couldn't help but wonder then what Mr Johnson or any of our other elected representatives would have thought when I was riding around Nizhny Novgorod in a taxi, eating a burger bought by the driver as we were picking up fares at 1am in the morning en route to my hotel. Or when, within five minutes of arriving into the city, I was ushered into a bar and given some raw fish to eat. Or when, after England had comprehensively defeated Panama 6-1 in their second game of the tournament, we were invited into a travel agents to drink cans of beer.

Nizhny you see was wonderful. Our group of five England fans and a token Bristol City supporter - welcome to McCarthy's Football Travels, Stuart - arrived in Moscow from Gatwick via Munich on the Saturday evening, allowing a cursory glance at Saint Basil's Cathedral as we passed through the Russian capital. Unfortunately, Red Square was closed off at this point for security reasons so there was no chance to enter it as we had a train to catch - onwards to Nizhny, driver.

Located 250 miles west of Moscow, Nizhny Novgorod was the main supplier of military equipment to the Russian front during World War II. As a result, it became a "closed city" after the war right through until the fall of the Soviet Union in 1990, meaning that no foreigners were not allowed to visit in order to protect Soviet military research and production facilities.

Certainly, it would have been unthinkable 25 years ago that there would be a train speeding its way from Moscow with a buffet car full of people singing about Vindaloos, Jamie Vardy being on fire and holding and giving but doing it at the right time. Yet that is what we had as English, Russian, Panamanian, Swedes and one Australian bloke who must have been lost came together to drink beer and sing songs for virtually the entire four-and-a-half hour journey.

Once we arrived in Nizhny, we found ourselves ushered into the aforementioned bar to try the aforementioned raw fish by the locals. Apparently, this is a Russian delicacy but I can't say it was particularly enjoyable, especially when I later discovered you aren't actually meant to eat the fish's head - eyes and all - which needless to say I'd done. If you ever need an excuse to speed drink beer, then trying to get rid of the taste of a dead fish's head is one way to do it.

The following day it was up early for a look around. Nizhny's main attraction is the 16th Century Kremlin, which features 13 towers and an extremely impressive cathedral. In honour of the cities military history, there are plenty of Russian tanks, planes and other army equipment around and a striking memorial to all those who died in the city during World War II, which was quite a few as it suffered heavy bombing from the Luftwaffe due to it's importance to the Red Army's supplies.


The Kremlin also provided a stunning view over the Spit, the confluence of the Volga and Oka Rivers. After appreciating the vastness and beauty of the city, it was off to Bolshaya Pokrovskaya Street for some pre-game beers and breakfast. The Big Breakfast itself was an interesting contraption featuring a sausage, some eggs, a load of salad and some kidney beans, all washed down with some Russian beer and a bloke dressed as Josef Stalin walking up and down the road, as you do, in between posing for a selfie with a Peter Crouch look-a-like.

Suitably fed and watered and with the mercury hitting 31 degrees, it was time for the free bus to the Nizhny Novgorod Stadium. Built at the Spit, the stadiums design is apparently meant to represent the Volga and Oka which both surround it, with plenty of blue and white waves incorporated into the design. The striking thing about it is not the colours though but the size of the roof. It was absolutely massive, one of the biggest I've ever seen and that grand size made a stadium of just shy of 44,000 look like it had room for at least another 15,000 inside.

An entire side of the ground is given away to hospitality while the stands themselves also follow the rivers theme, swirling up in the middle and being lower in the corners, rather like the Emirates Stadium just with an atmosphere. That atmosphere was no doubt fuelled by the fact that you could drink alcohol in your seats, a worrying development for those of us who like our 90 minutes of football to provide much needed respite from beer, although plenty of liquid refreshment was needed by the time we'd climbed the hundreds of steps to the upper tier where Stuart and myself were located.


The game itself was one of the more surreal I've seen. Yes, it was only Panama but to see England 5-0 up at half time led to utter disbelief on the concourse. A couple of friendly Russian blokes in our section - note Boris, they didn't want to assassinate us - even began boldly predicting England will go all the way. You could tell they aren't used to the normal disappointment that goes with supporting the Three Lions - either that or they'd been inhaling too much Novichok.

It finished up 6-1, Harry Kane becoming only the third Englishman to score a hat-trick at a World Cup, John Stones moving two ahead of Lionel Messi in the top scorers chart and there was even a brilliant strike from ex-Brighton player Jesse Lingard to round things off nicely. This was my first ever game at a World Cup and it is hard not to think that, from here, it's going to be all downhill as how do you top a 6-1 win, quarter final spot booked and 30 degrees throughout? If Carlsberg did World Cup games... well, you wouldn't be allowed to mention them as Budweiser are the official sponsors.

We left the stadium giddy from what we'd just seen and soon bumped into Adrian Durham outside the ground who wanted to know our thoughts for talkSPORTDrive. The only answer we had was to tell him "England's going all the waayyyyyyyy" which probably doesn't make for good radio, before being invited into a travel agents by some more locals. The Foreign Affairs Committee would expect us to be carted off to the Gulag at this point or fed to a bear being ridden by Putin, but our Russian hosts actually gave us some funny hats to wear, some beers to drink and started taking selfies.

Once we'd managed to drag ourselves away from the travel agents, it was back into town to continue the party. Given that Colombia were playing 250 miles away in Kazan, there were a huge number of their supporters watching the game in Nizhny and that made for a brilliant atmosphere on the main street after their James Rodriguez-inspired 3-0 win over Poland.

The party went on until around 1am with English, Panamanians, Colombians and Russians buying each other beers and vodka - and Russian vodka comes in bloody big measures, I can tell you that much - at which point it was off to find a taxi back home. Another head-shaking moment for you here, Mr Johnson, as the taxi driver began collecting other fares on the way back to the hotel, and then went and bought me a burger before he eventually returned me to base.

So despite all the warnings of our politicians and the press, we had survived Nizhny Novgorod with nothing more than a 6-1 win and some dead fish to show for our troubles. Next stop, a couple of days in Saint Petersburg via a 22-hour train before moving onto Kaliningrad for the Belgium game.

To be continued - presuming I don't die on the way, of course. 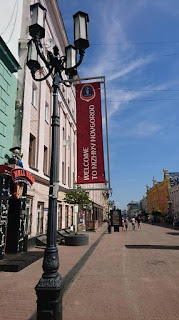 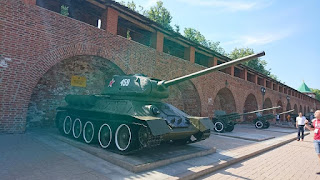 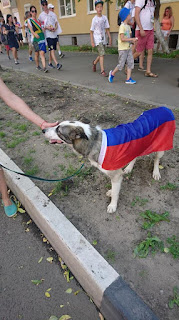 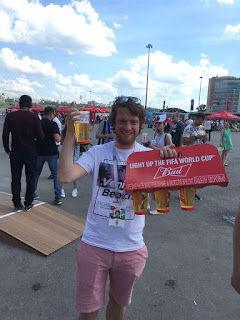 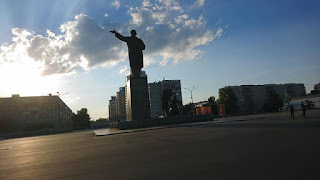 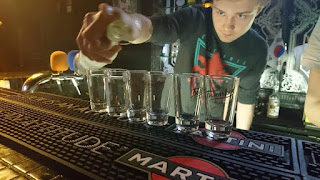 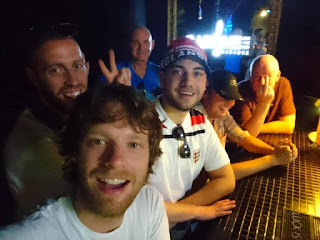