"That right back is an absolute liability. He's got less balance than a Subutteo player. It's like watching a Granny on Ice"

Ah Brisbane. Where the defence (and surrender) of The Ashes began in such inglorious fashion two months previously. Having had the misfortune to catch the fourth and fifth tests in Melbourne and Syndey respectively, it was time to get back to some proper sport and that meant a trip to the Suncorp Stadium to catch the Brisbane Roar taking on Adelaide United in Hyundai A-League action.

Each side in the A-League is allowed what they can an "international marquee" player. It has allowed the likes of Sydney United to lure Alessandro Del Piero, the Newcastle Jets Emile Heskey and Perth Glory William Gallas to play for them. So which former international star could we look forward to seeing for the Brisbane Roar? Liam Miller. Liam bloody Miller.

Of course, the Australian marketing machine - almost as effective as their cousins in America - bills him as a former Manchester United player which gets the locals blood pumping even if the majority of them seem to support Liverpool. To seasoned observers of the EPL it is hard not to stifle a laugh. How excited would they get over the thought of Eric Djemba Djemba? Probably enough to bring on a seizure.

Suncorp is about a ten minute walk from the city centre and is traditionally a home of rugby league, hosting the NRL side the Brisbane Broncos. It's an impressive stadium, holding 52,500 people which is obviously far too much for a regular season A-League game. The top two tiers were shut off for the visit of Adelaide with the second tier being pretty bare as well, concentrating 85% of the fans into the lower bowl of the arena.

Brisbane pride themselves on the atmosphere inside the stadium, with chants taken from various European clubs and adapted to the Roar. The best of these being a remix of Erasure and Just Can't Get Enough which ends with the imaginative line of "WE LOVE BRISBANE". The majority of that influence seems to come from Germany (where else?) with one bloke leading the singing section from a platform at the front, his back to the game with a megaphone. This area was known as The Den, so I'm sure you can imagine the disappointment when they didn't produce a long, intimidating BRISSSSSSSSSSSSSSSSS drawl in true Millllllllllllllllll style.


These fans marched through the streets of Milton, the Brisbane suburb where Suncorp is before the game with their flags, flares and having a sing song while the packed bars leading up the stadium watched on. Once in the ground however their efforts to make an atmosphere were just slightly more effective than the performance of Diogo Ferreira (more on him in a minute). In fairness to The Den, they weren't helped on the day by the 35,000 empty seats with the noise being created from the bottom tier pretty much escaping straight out of the ground.

Australians seem to love a good bit of pyrotechnics which may or may not be a link to their convict past. The Big Bash Twenty20 League is full of them for every four and every six and this was no different, with fire and explosions to greet the teams onto the pitch and the added bonus of them going off for a home goal. Cup Finals are about the only time you get it in England, although I do recall Wolves experimenting with it probably a decade ago until a woman in the stand got hit in the face by a firework. Only in Wolverhampton.

And back to that man Ferreira as promised. An Aussie right back who had somehow spent time at Porto, he was the definition of liability. Within a matter of minutes he'd managed to get himself booked and it was pretty clear to anybody who had the smallest piece of knowledge about association football what was going to happen before the game was out. And that inevitable arrived on 40 minutes when a tackle that would be considered rash even if he wasn't on a yellow was dished out with the resulting red card to follow. The fact he then had the nerve to have a complete breakdown at the referee over the decision just added to the pantomime feel of the character.

The Roar were already 1-0 down when Ferreira took his early bath, put on his facepaint and big red nose and drove his ridiculously small car away from the stadium - Adelaide converting the rebound from a penalty from the wonderfully named Jeronimo Neumann. The introduction of Albanian striker Besart Berisha - who can only be described as a a total mental case and probably far more worthy of international marquee status than Miller - turned the game in the second half as despite their numerical disadvantage, the Roar dominated proceedings with Berisha scoring on 80 minutes. That wasn't that though as United's Jordan Elsey netted a first class header with seconds to spare to shock the league ladder leaders - and yes, it is really called a league ladder.

At the end of the game the players and manager wandered into the crowd to thank them for their support and despite the defeat, Roar manager Mike Mulvey managed to avoid being punched in the face which is what would surely arise should say Sam Allardyce try the same trick at West Ham's next home game. All of the players except Ferreira of course, who was presumably at this point already back on the cities wonderful Queens Street area entertaining the Saturday night crowds busking as a clown. 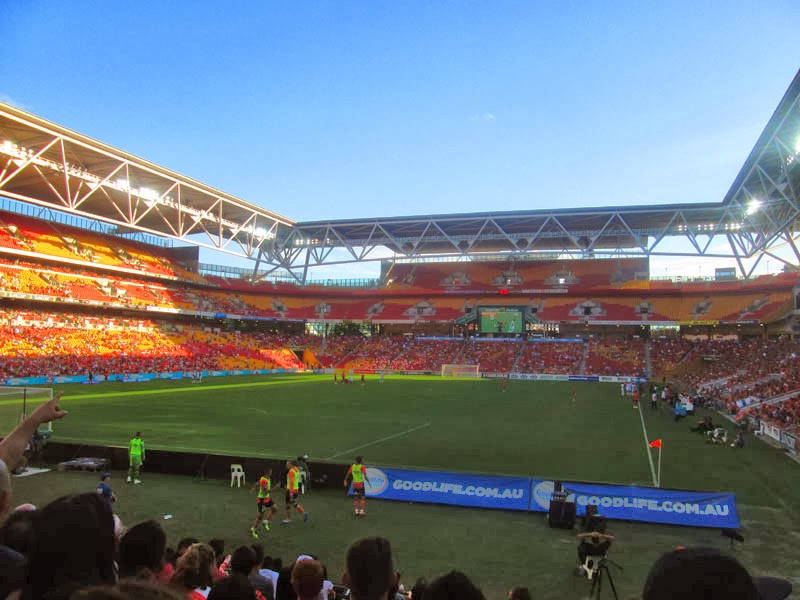