"Ghent has the world’s most vegetarian restaurants per head. Thank Christ we'll be too busy drinking to eat anything"

If your team reaches the Champions League knockout stages for the first time in their history and you know you have very little chance of lifting the trophy come the end of the season, then perceived wisdom suggests you should want to draw one of the big boys and go out with a bang and a trip to one of Europe's Cathedrals of football.

Well sod that. With all due respect to those at Camp Nou, the Bernabeu or Juventus Stadium, the place we wanted Wolfsburg to be sent to was Ghelamco Arena, home of the Belgian champions and another side losing their Champions League last 16 virginity, Gent.

The reason behind shunning the big boys in favour of the tournaments smallest remaining club was very simple. A well respected and experienced traveller had described the city of Ghent to us as "Bruges but on a smaller scale, cheaper and with a lot less tourists". Having experienced Bruges on last years Belgian themed football trip, that basically meant an absolute plethora of pubs to visit all serving beers that would blow your head off - metaphorically speaking of course.

Thankfully, the footballing Gods came together to decree that Wolfsburg would visit Gent and so we found ourselves emailing our old mate, Holger Ballwanz. A word on Holger here if I may diverge - and I may, it is my blog after all. Holger played nearly 200 times for Wolfsburg and is now what is effectively a Fan Liason Officer. He looks after the supporters and for reason that very few people would be able to fathom other than a highly paid psychiatrist, we are among those supporters. It is obviously difficult for us to sort out tickets for ourselves living 600 odd miles away but Holger without fail always manages to get them on our behalf. It's like somebody in Germany getting in contact with a retired Ledley King at Spurs and him sorting out tickets for them whenever they can make a game. Can you ever imagine that happening in the profit and corporate driven world of the Premier League? No, and that is why German football is superior.

Knowing full well the damage that Belgian beer has reeked on the broken bodies and minds of greater men on previous visits, the wise decision was taken to embark on just the three beers on the Eurostar over, with one following while we awaited a connection at Brussels. The Eurostar is a glorious way to travel, even more so when you can go onwards to anywhere in Belgium with your ticket and we took full advantage of that to arrive in Ghent at around 3pm.

That left the best part of six hours until kick off, plenty of time to "explore". That exploration took us to see Saint Nickolas Church and have a wander around the cobbled streets which confirmed one aspect of the Bruges comparison. But how would Ghent do in the beer stakes against it's northern cousin? Well, the 10 bars we visited over the course of the evening suggests pretty well.

Wolfsburg had arranged for their supporters to meet in Dulle Griet before the game which we duly did for a few "weak" beers of only 8%. That loosened up the tongue for when the inevitable questions came as we began chatting to Die Wolfe's travelling army about why we supported their club with the answer of "Schteve McClaren" resulting in the normal reaction of bemusement and the sort of look you tend to reserve for people who you suspect should be locked up in a secure mental facility.

Mental we may be, but this was our third away game out of four on the Champions League tour with Wolfsburg and we were soon being asked if we were joining the fans on the shuttle bus for the journey to the ground. No was the answer - it would be leaving two hours before kick off and we had to visit plenty more pubs. Purely for research purposes in our quest to compare the city to Bruges, you understand.

And so we left our fellow Wolfsburg fans and headed off on this mission of great importance. It took us to Primus, The Cover, Trefpunt, Gloria and Bar des Amis before the game. Trefpunt and Gloria were the stand out pubs of these, the former for having a man with the greatest waxed moustache I have ever seen in my life and the latter for being an underground bar that appeared to have been hollowed out of a cave and was lit with what seemed to be only candles.

Like a good batsman building his innings, we'd got our eye in with the 8% stuff and by the time we were in the taxi heading to Ghelmaco Arena we'd moved through the gears to hit the 14% beer. This proved to be a dangerous move in terms of bladder control as the stadium was some way out of the city. Ghelmaco Arena was only opened in 2013, which Wikipedia reliably informs me makes it the first new stadium to open in Belgium since 1974.

From the outside, it looked more like a shopping centre, very square and lit up in the brilliant bright blue colours of Gent - although on this evening, the wonderfully nicknamed Buffalos played in a stunning electric yellow. It's on the small side, holding just 20,000 which means tickets are hard to come by for a lot of games. But that smallness and intimacy leads to an excellent atmosphere which is no doubt helped by the fact that the stands are steep, keeping the noise in and the fans close to the pitch. It also clearly has the corporate fan in mind, with the two stands along the sides of the pitch featuring a whole host of executive box facilities as well as some giant windows that jutted out over the back couple of rows of seats.

The Wolfsburg support were kept in one corner and had plenty to cheer, thanks partly to the Belgian champions bizarre formation. Now despite being a Sunday League title winning manager, I'm not going to claim to be Gary Neville with an iPad at the best of times, let alone after 10 pints of Belgian beer. But Gent seemed to be in a rather odd 3-1-3-1-2 set up which needless to say was a total disaster for 80 minutes. They were also up against Julian Draxler who was playing like a man possessed. The German international scored one right on the stroke of half time and then added a second ten minutes after the restart. Max Kruse added the third after which Wolfsburg hit the bar. It could have been a massacre but somehow Gent will go to Germany for the second leg still in the tie as the Wolfsburg defenced parted like the proverbial red sea in the last ten minutes to allow Sven Kums and Kalifa Coulibaly to pull two back with the game finishing 3-2.

Lady luck was with us again as we exited the Ghelmaco as we managed to jump straight in a taxi along with Rob, another bloke we discovered who travels out from England to support Wolfsburg, with the instruction to the driver of "take us where the nightlife is." The man absolutely delivered on this front, dropping us in a student area packed with bars and we soon found one local chap who was happy to take us on yet another pub crawl to toast the Wolfsburg win which saw us add Rock Circus, Salamander and Delirium to the pubs list.

Ghent has the most vegetarian restaurants per head of any city in the world which meant we’d avoided eating all day and so you can only imagine the relief when the bar lady in Salamader took pity on our food plight and presented us with a complimentary sausage. This is not a euphemism, but one genuine meat sausage on a plate. "Don't have too much mustard, it is very hot," was the friendly warning which was needless to say ignored - the result being that the mustard was nearly so hot as to make me sick. Still, having the roof of your mouth burnt off is better than eating something veggie.

We eventually stumbled back to the hotel at 3am, waking up the next morning in a world of too-much-strong-Belgian-beer related trouble as confidently predicted some 12 hours previously. But the ultimate conclusion was that our learned friend had actually got it wrong in his description of Ghent.

Ghent was like Bruges, but on a smaller scale, cheaper and with less tourists - and slightly better. High praise indeed. 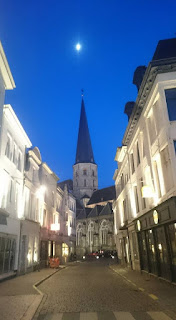 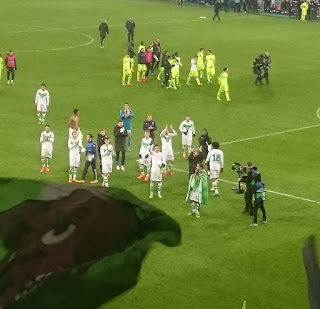