"Why are Wolfsburg singing about 1945? Do you think it's to do with the end of the war?"

Ask most people why they would go and watch St Pauli and you'll get a multitude of answers - the clubs popularity across Europe for it's unique culture. It's left wing political leanings. It's anti-establishment position. It's link to the punk scene. The brown kit. The red hot atmosphere of the Millerntor-Stadion. It's location in Hamburg's red light district. What you are unlikely to hear is Schteve McClaren's VfL Wolfsburg were in town.

But that was the reason we had. Schteve took over at Wolfsburg in the summer after becoming the first English manager in 20 years to lift a major domestic league title with FC Twente in the Netherlands. And, being the sad case that he is, Rumble had decided to arrange his stag do to Hamburg around seeing Mr McClaren lead out his side at the Millerntor.

What nobody expected when that decision was made was that in writing to Schteve to tell him we were coming to support his team, he would send back a load of tickets in the away end as well as a signed shirt congratulating Andy on his engagement. Just when you thought you couldn't love the man (Schteve, not Rumble) anymore.

We'd spent two days in Hamburg prior to the game and if you want somewhere to go with a large group of English men who enjoy beer, meat and women then this is it. It's little wonder The Beatles loved the place so much - there were pubs galore on either side of the Reeperbahn which is were we spent most of our time drinking. Of course, St Pauli aren't the cities only football team - we also checked out the stadium of their rivals Hamburger SV. As luck would have it, we got to see the side train on pitches outside the Imetech Arena which included Ruud van Nistelrooy. Every time he netted he was greeted with a big "RUUUUUUDDDDDD" from the gathered masses which didn't go down well if the fact he scarpered as soon as the session was done is anything to go by.

Game day arrived and it was an evening kick off at Millerntor which would make the already intense atmosphere even greater. With St Pauli being the team of the Reeperbahn area of the city, most of the bars play up their association with flags, scarves and shirts all over the place. We drank in several of these before the game, heading to the stadium quite late.

The ground isn't quite the old school wreck it used to be, with two new stands built in recent years ahead of their rise into the Bundesliga for 2010-11. One of those is behind the goal and features a terrace with seats behind it, home to the more fanatical of the St Pauli support. Thousands of fans in this stand lit sparklers and held them up when the teams entered the pitch to the pre-game song of Hells Bells by ACDC.

A large seated stand now occupies one touchline with executive boxes at the back to show that no matter how left wing or anti-establishment a club you are, you still need the money to be rolling in from the big corporations. Opposite that is the famed Gegengerade - a bank of terracing with a small seated stand perched above it while we were sat amongst the Wolfsburg fans in a corner of the other goal, a small terrace at the front which had had temporary seats added behind it.

The stand was split between the home and away support which was just as well as you got the feeling that if everybody jumped up at once in celebration the thing would come tumbling down. In fact, you could have built it out of Lego and it would have been more secure.

The atmosphere was sensational with the ground filled to it's 25,000 capacity. It really was non stop noise throughout from both supporters and if there is anybody in any doubt at the difference that terracing can make in terms of improving the footballing experience, then the Millerntor is the place to go. St Pauli have adopted a number of English songs for their repetoire which makes them quite unique in Germany in that respect while Wolfsburg's favourite number is about 1945 - a celebration of the year they were founded as opposed to the end of World War II we discovered.

Both teams were poor but Wolfsburg had a true hero on the pitch in the shape of Danish defender Simon Kjaer. Long blonde hair, alice band, coloured boots - he was everything a centre back shouldn't be and he played like it as well. It was quite incredible to find out after the game then that Schteve forked out over £10m for him.

St Pauli took the lead to deafening roars in the first half through Markus Thorandt's bullet header. That was cancelled out by Edin Dzeko in the second half with a point probably being a fair result come the final whistle. At the end of the game both sides left to the Millerntor belting out You'll Never Walk Alone which was quite the sight.

After stumbling across a Wolfsburg merchandise van we stocked up on scarves and hats of our new German team proving that even if Schteve isn't having the desired effect on the pitch, he certainly is off it driving sales of supporters knitwear through the roof.  Such is the way modern football is going, those extra euros in the till might keep him in a job for a little longer. Happy to play our part, Schteve.

The best was yet to come though as if the football is a letdown like this was, then the addition of a bloody huge funfair behind the Gegengerade provided an hours entertainment long after the final whistle had gone. Only at St Pauli. 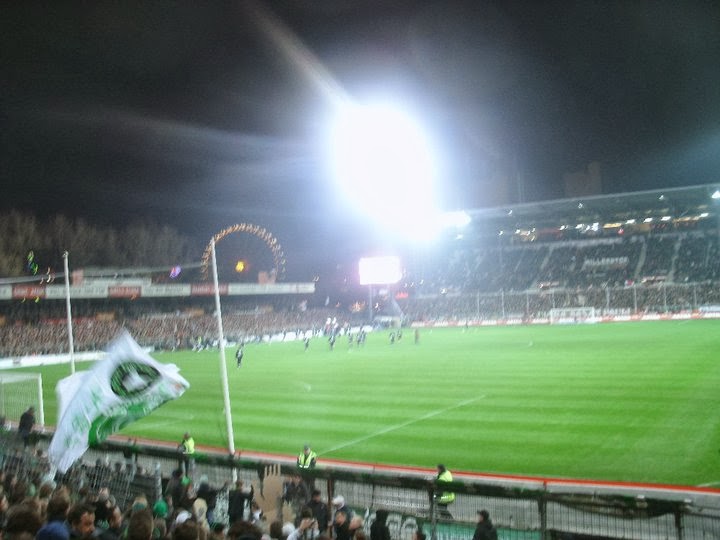