"It's a shame the French didn't show as much spirit and determination in fighting foreign visitors in 1940 as the locals have down in the port area over the last few days."

First things first - yes, I am alive and well. It's never a good sign when the most commonly asked question you get when away on international duty from those watching back home is "Are you safe?" Thankfully, it very rarely happens but England v Russia in Marseille was one of those occasions when the messages came flooding in.

"England fans riot" is the sort of the headline that people love to write. It sells newspapers, it gets clicks to websites and if you are a certain Labour MP who failed catastrophically to become the parties leader and looks suspiciously like a Thunderbid puppet, then it gets you retweets.

From the way the events in Marseille have been reported, you'd be forgiven for thinking that once the English and Russian fans clear out and head north to Lens and Lille respectively for their second games in Group B, they will leave behind a city that has been reduced to rubble after 72 hours of running battles.


In reality, most of the trouble was confined to the port area. Avoid that and you would generally avoid being hit with a bottle, a water cannon (which wouldn't necessarily have been a bad thing after I’d spent 24 hours in the same clothes) or the French police's liberal deployment of tear gas. Do they have a contract with a supplier? There must be an incentive for them to get through so much, such as the more tear gas they use, the cheaper they can get it for. Even when there was no sign of trouble, they were only too happy to inflict it on supporters who had the nerve to gather, drink and sing. You suspect that if The Last Supper had taken place in Marseille, Jesus and co would have ended up tear gassed. 12 foreigners gathered together having a good time? We can't be having that.

So you've got a police force who think the answer to everything is to make peoples eyes burns and their throats choke followed by a traditional batten charge. Then you have the locals. Their role in proceedings seems to have gone largely unreported, but then again it doesn't really reflect well on the hosts if their own nationals are running around battering guests. Olympique Marseille's ultras are well known and they were out in force around the port, barging into pubs with weapons and ensuring things kicked off nicely. For England fans who had gathered in the run up to the game, it was largely the local population who were starting the fun and games of Thursday and Friday night, knowing that some of the less intelligent of England supporters who can’t handle their beer would be happy enough to respond in kind. Make no mistake, a minority of England fans were far from blameless.

And then of course we come to our friends from Russia. They were relentless inside the stadium once the final whistle blew, some masking their faces and storming across the "segregation" (a small strip of tarpaulin that wouldn't have been enough to provide a tent at Glastonbury), past the flummoxed stewards and into England fans and neutrals. It was precise and organised like a military operation – a far cry from a few drunks luzzing chairs around. From the opposite end of the ground where the majority of England fans had their tickets, you could only stand and watch as a sea of bodies scrambled away from the charging mob who were throwing punches at everyone and everything with nobody in a position of responsibility willing to intervene to help. That section of the stadium would have originally been designated for Russian supporters but with them not selling out their allocation, it was used in the later ballots to allocate tickets to casual fans. Many of them were English but the ballot means that there would have been a fair share of neutrals, some even Russian. Not that that mattered to the Russian hooligans, anyone in their path of destruction was fair game.

If it was frustrating watching from 100 yards away as your fellow countryman are innocently beaten by rampaging Russians, then it was excruciating to be met upon leaving the stadium by 100 riot police keeping an eye on the England support as we exited. An actual riot going on inside the stadium? Nah, we're not interested. We’ll stand here watching you instead. They were either happy to see the supporters scrambling away dangerously over fences and walls as if their lives depended on it, or Uefa didn't want them inside the stadium for fear of how it would look on television.

Uefa also didn't want flares, pyrotechnics or presumably things like bombs inside the stadium. We've been constantly told by the FA, the Home Office and countless others that France is a country on the highest level of terrorism alert. Now I'm not a security expert, far from it. There have been at least five occasions when I've driven off and left the front door wide open. But I suspect if you want to stop a terrorist attack occurring in a stadium, then you should probably have more than one casual pat down lasting all of five seconds as fans enter the stadium. My bag wasn't even searched, just given a cursory glance and waved through. Luckily, it had just a flag and a phone charger in but there could have been anything contained within. A bomb. A suicide vest. A gun - rather like the flare gun the Russian's used to launch fireworks onto the pitch and into the England section. The cue for that charge over the segregation came from a very loud explosion which one fan in front of me actually mistook for a bomb, hitting the deck when it went off. That reaction provoked laughter around but think how serious it could have been. Anything could have been smuggled into that ground with a minimal amount of effort. It was only marginally safer in the Velodrome than you would be walking down Raqqa high street with an "I hate ISIS" t-shirt on.

Which is a shame as I'd hate to see the Velodrome blown up. It is a fantastic stadium, earning an instant place in my top five, perhaps even going straight into the top three. The steep curved stands are a thing of beauty, disappearing high up as far as the eye can see. The main stand in particular is a mish mash of tiers and a seat right up the top - from which the view must be stunning - would be no good for anyone with vertigo. The stadium underwent renovation for the tournament, the biggest part of which included the installation of a huge new roof engulfing the ground. This greenhouse like structure kept all the noise in and that made for one of the best atmospheres I can remember being part of. It was genuinely deafening and the place was rocking from at least an hour before kick off. If aliens were suddenly to be appear on Earth, this was the sort of stadium and game you would take them to in order to show them just why the beautiful game is the most popular sport on the planet. You’d just have to get them out before the charge of the light brigade on the final whistle and hope they have a tolerance to tear gas.

Getting to the Velodrome itself had been an interesting experience, with the Metro being shut in the run up to the game forcing those heading in the hours before kick off to walk. Thankfully, the Mediterranean sun was beating down for the 40 minute stroll from the city centre and with a plethora of little bars to stop at on route from the station for refuelling, it was a pleasant experience that was far removed from the scenes of chaos being reported as standard by the media. And, keep this quiet, but supporters of both teams mingled with no sign of any trouble as the beers flowed.

It was a totally different atmosphere for the walk back, with tension in the air given the scenes at the end of the match and local kids riding full pelt on their mopeds through busy crowds as if they were determined to crash into people. Which they probably were. England conceding in the last minute to throw away what should have been three points for the Three Lions after Eric Dier's brilliant free kick sent the 50,000 odd English fans wild would have dented the party atmosphere regardless as a draw felt more like a defeat given how well England played in the first half, but the scenes at the end also had their effect on the tense post-game atmosphere.

Stories were passed around about Russian's going on the rampage again in the port area afterwards, England fans being locked into pubs and bars for their own safety by sensible and caring landlords. Marseille Saint-Charles station provided a refuge from the battles being waged 10 minutes away and on boarding the 1.30am overnight train back to Paris, the 50 or so riot police who had been ordered to take the journey north back looked pretty upset that rather than being able to pick up more commission for deploying their tear gas, they were simply greeted by a packed train of supporters of both teams going straight to sleep ahead of a 6am arrival in the capital.

The train had taken the strain on the way to Marseille on Saturday afternoon as well, which meant that Friday night was spent in a Paris that was in party mood. Nearly every country was represented in the huge fan zone underneath the Eiffel Tower for the opening match between the hosts and Romania. There was no sign of trouble here as everyone gathered to enjoy the party, a rousing rendition of La Marseillaise under the shadow of France's most famous sight. The noise and celebrations when Dimitri Payet scored an absolute worldie out of nothing to secure a late win for Les Bleus were as if Hugo Lloris was on the podium lifting the Henri Delaunay trophy, rather than a scrappy win over what appeared to be pretty limited opposition. Goodness knows what the scenes will be like if Lloris is in fact back there on July 11th hoisting the cup in the air.

So it's been a mixed start to Euro 2016. Paris was excellent, the celebrations wild and the beer flowing even if Uefa's sponsorship deals mean that you can only purchase Carlsberg in the Fanzones. If Carlsberg did Fanzones, they wouldn't sell Carlsberg. They'd sell Kanterbrau, the best French beer of the trip thus far. As for Marseille, the pubs were good, the weather was good but the people and the police are the sort that you wouldn't piss on if they were on fire. If the boot was on the other foot and you were on fire, they'd probably pour more petrol over you or kick your head in for good measure.

After 12 hours in Marseille, it isn’t a place I would be in any rush to head back to – although I suspect an Olympique game in a packed Velodrome would be quite the experience. But a match with an English team involved? No thanks. And here is where the bad news comes. Finish second or third in Group B and England would face a potential semi-final back at the Velodrome. Think we all know what is going to happen now - and it isn't the traditional quarter final defeat on penalties. 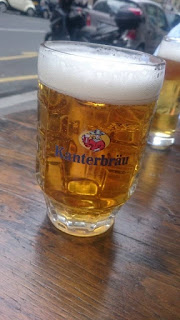 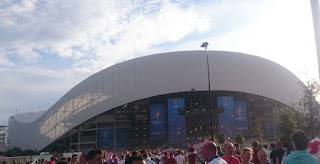 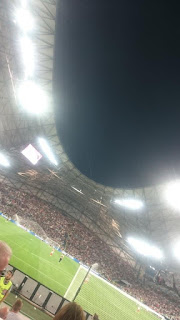