"If I had to take an educated guess at what we're eating, I'd say it probably ran in the 16.05 at Auteuil on Sunday."

I live in a reasonably sized Mid Sussex commuter town by the name of Burgess Hill, about 15 miles north of Brighton with a population of 30,635 according to the 2011 census. By comparison, Lens in 2012 had a population of 32,663. That meant that UEFA were basically holding England v Wales, set to be one of the most popular group games at Euro 2016, in a French version of Burgess Hill. Is it any wonder that people were kicking up a fuss about the venue?

Well, yes actually and they really shouldn’t have been. There are some not-so-subtle differences between the town in northern France and the one in southern England. Take the respective communities football clubs. RC Lens' Stade Bollaert-Delelis is capable of holding around 38,000 people which is slightly more than Burgess Hill Town's Green Elephant Stadium with a capacity of 2,000. Lens is famed for its huge coal slag heaps which are a UNESCO world heritage site. It is unlikely that Burgess Hill's slags of a quite different sort that can be found of a Saturday night in the town’s one nightspot Pulse are likely to receive honours from the UN anytime soon.

The French and British authorities were desperate to keep ticketless fans away from Lens. Their first tactic was to say there would be no alcohol on sale in the town. Then they told supporters to go to neighbouring Lille to watch in the fanzone and bars there. After people heeded that advice, altered their travel and booked accommodation in Lille accordingly, another problem belatedly dawned on the organisers – Russia were in Lille the night before. Forget everything we told you and go watch the game anywhere but Lens or Lille was the next piece of guidance. With all this hulaballo going on, you’d have been forgiven for expecting it to be absolute carnage in little old Lens, but the truth is that it actually proved to be an excellent host for the Battle of Britain. Although I nearly didn't make it there to find out.

Friday night you see was spent in Paris. Before Euro 2016, Paris was just about on a par with Baghdad, Tripoli and Caracas as places I was in no hurry to visit. On every previous visit I'd hated the place but something magical has happened during this tournament in that I've grown to actually quite like it. It's got to the point now that not even the fact that I ended up eating what can only be described as a former racehorse for dinner before getting locked for an hour and a half in a shopping centre that resembled a building site has put me off the place.

Firstly, to the dinner. My good friend Joe and I had met up in the Rue Saint-Denis area to watch Les Bleus late victory over Albania with some beers and food. On the menu was the generically described "Piece of meat, depending on the market" that weighed in at around half the price of a standard issue steak. No need to worry the waiter explained, the “piece of meat”was also a steak. What he neglected to point out however, was that "the market" was obviously a faller from Sunday's racing at the nearby Auteuil track as a huge great piece of horse came out accompanied by some chips and a healthy serving of some much needed salad. Undeterred by the fact that Shergar’s cousin was winking up from the plate, Joe and I both ploughed through and weren't left disappointed. It is little wonder that nobody complained about Tesco's meat until they knew they were eating My Little Pony as horse tasted bloody good.

After that, we were joined by Coventry fan Sara for a pub crawl of Rue Saint-Denis, after which the sensible decision was taken to get the metro home. Sensible, that is, if the metro had have run all the way to its final destination which needless to say it didn't, instead inexplicably stopping at a station that exited into a closed shopping centre in which a lot of overnight building work was going on. It was hard to know what to be more surprised at, the fact that I was seemingly locked in a Paris shopping centre in the early hours of the morning or that there were builders in France actually carrying out work and not on strike.

The shopping complex itself was an elaborate corridor of mazes with no unlocked doors that it took over an hour and a half to finally find an exit out of. Not that anybody inside the building seemed overly bothered about a lone, slightly drunk Englishman wandering aimlessly around. Again, for a country and city on the highest state of security alert it is just as well I did not have a bomb on me. Eventually, I was out of the building, from where it was another 45 minute walk back to the hostel, finally clambering gracefully onto the top bed of a triple bunk at around 5am. And then to round things off nicely, when I woke up perilously close to missing the train to Lens five hours later, I discovered my trousers were missing. Excellent.

The only way to get over losing a pair of your favourite jeans is to have a beer to toast the happy times you spent together. Thankfully, the Lens alcohol ban proved to be the myth that most of us strongly suspected it would be. The entrepreneurial kebab shop opposite Lens station was doing a roaring trade in cans of Kronenbourg and when they ran out, out came some 8.6% Belgian beer. From fears of no beer to hallucinogenic beer being consumed on the streets, this was the most welcome of developments. Meeting up with fellow Brighton fan Mark and Man City Dave, we went to another bar that had ran out completely of draft beer and was very close to being drunk out of Sol as well. Despite the fact that Lens seemed to be on the verge of running dry, there was no trouble (no Russians = no trouble, who'd have thought that?) and England and Wales fans were soon meandering through the town on the short walk to Stade Bollaert-Delelis.

Stade Bollaert-Delelis was basically a traditional English ground - four separate stands, all two tiered and all rammed with supporters of both sides. Lots had been made of Wales - and in particular, Gareth Bale's - comments about the Welsh being far more passionate than the English in the build up to the game. If Bale and co truly believed that then they would have known by the final whistle that they were gravely mistaken, the atmosphere from the English end being as loud, if not louder, than the so-called more passionate Welsh. There was a sense of respect between the two sets of supporters as well, with the rousing rendition of Land Of My Fathers even getting a smattering of applause from the English support.

Wales went into half time 1-0 ahead thanks to a combination of a Bale free kick from 35 yards and Joe Hart developing chocolate wrists, which led to England being booed off by elements of the Three Lions support. Raheem Sterling was on the end of most of the flak. "England's going home" sang the Welsh. Roy Hodgson gambled in the second half, sending on Jamie Vardy and Daniel Sturridge and his boldness at the break saw the supporters as well as the team galvanised. That second 45 minutes was one of the best in terms of support from the stands that I have witnessed and once Vardy equalised the general feeling on the terraces was that there was only going to be one winner of the game – and it wasn’t going to be Bale and co.

England left it late to prove that theory right, Sturridge scoring at the death to spark wild scenes as bodies went flying over seats and grown men who didn't know each other kissed and embraced. Football, bloody hell as somebody once said. "Footballs coming home" now the English fans sang back to their earlier tormentors. There was little sympathy for Wales' players given all their comments in the build-up about their passion and how no England player would get in their team, but it was hard not to feel just the smallest bit sorry for their fans. Hopefully, they can join England in the last 16 and knock Russia out along the way.

As for the English support, that second half performance when fans and players were united as one (#TogetherForEngland as The FA marketing bods would put it) as well as Hodgson throwing caution to the wind and going on the attack to win the game felt like a genuine turning point. England aren't going to progress far in this tournament by being defensive, their back four isn’t good enough for that. But play on the front foot like they did in the second half, and who knows - maybe it won't be the traditional exit on penalties in the quarter finals.

That was certainly the feeling on the train back to Paris after the game, from where it was the Eurostar home. They say bad things come in three's and so after Shoppingcentregate and Losttrousersgate there was bound to be another cock up and that duly arrived when trespasses on the line outside Gare du Nord meant that the train was nearly two hours late leaving for St Pancras; a delay which meant missing the last connection back to Burgess Hill - the Lens of southern England, lest we forget - and a night sleeping rather uncomfortably on the platform of London’s international train terminal.

But when England win like that, it's hard to mind. Especially if football does come home. 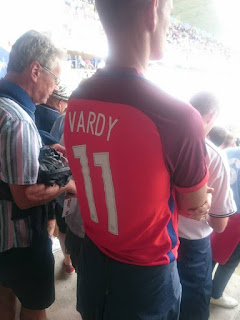 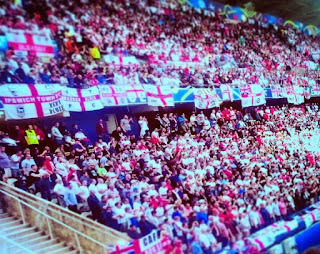 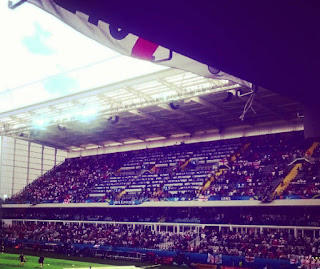