"I assumed you were joking when you said you were bringing us a pack of beer up because the pubs here aren't allowed to open until 11am."

England v Scotland games are like the proverbial London Bus. You wait 14 years for one to come along, and then you end up with four in three years. Not that any supporters of the two nations would've complaining.

No, the only murmurs of discontent predictably came from the police and the British press. The police had firstly wanted this game to be a midday kick off and then when that request was quite rightly denied, they decided to put in place a ban on any street drinking across the weekend. Spoilsports.

As for the press, well the way they carried on in the run up to the game you could've been forgiven for expecting World War III to break out on the streets of Glasgow. One respected national journalist even went so far as to suggest a return to "The dark days of 1980s hooliganism" was on the cards, based on two idiots pulling Hitler salutes at the Germany away game back in March.

In completely surprising news, this full blown campaign of bed wetting hysteria turned out to be absolute nonsense. Both sets of supporters were passionate but it was never anything more than that. There was even the surreal sight of Scotland and England fans clapping each other as the Scots exited Hampden Park while the visitors were locked in for 30 minutes after the final whistle. Needless to say, that show of mutual respect didn't make any of the papers the next day.

This was effectively a day trip for me thanks to that old favourite, the National Express overnight coach. A 10.15pm departure from London Victoria on Friday night saw a 7.15am arrival in Glasgow Saturday morning while going back the other way it was a 10.15 departure Saturday evening, arriving back in London at 6.40am. Travel and accommodation rolled into one and for less than £30. Which was just as well as the match ticket was a stonking £55.

Now if Scotland were a modern, civilised country then a 7.15am arrival would've been no problem at all. A quick visit to Wetherspoons for a fry up and a pint would've got the day off to an excellent start. Scotland is however still living in the 1990s, with draconian drinking laws that mean pubs can only serve alcohol between the hours of 11am and midnight. This makes somewhat of a mockery out of the claim that it is a nation of drinkers, when you can in fact only drink in the prescribed hours laid down by Nicola Sturgeon.

Miss Sturgeon had burned me in this way on England's last game in Scotland at Celtic Park in November 2014 and, much like the Scottish electorate in the general election 48 hours previously, I wasn't going to be fooled by her a second time around. Before leaving London four cans of Kronenbourg were purchased and so I trotted off to meet my fellow Brighton supporter Lewis in his hotel room, where we enjoyed a morning beer and Coronation Street omnibus. If watching Bethany Platt attempting to run away with a bloke old enough to be her father doesn't get you up for one of the most historic rivalries in international football, nothing will.

By 11am and opening time, a gabble of Brighton supporters had gathered at Bon Accord for a pub crawl leading from the Charring Cross area of Glasgow right back to Central Station. As well as the Bon Accord, the crawl took in The Henglers Circus, a pub very aptly named The State, The Hippo Tap Room and The Pot Still. It proved to be well worth the four hours wait between my arrival and opening time as the pubs were excellent, as was the whiskey which ended up being a pretty unnecessary accompaniment to each Tennants. The Scottish theme didn't stop there either as haggis was taken on board for lunch. Thankfully, I managed to escape having a haggis bomb, which is seemingly a Jaegerbomb with the Red Bull substituted for Irn Bru. Lewis had the misfortune to have one after the game at approximately 2am in Popworld and reported back that they are every bit as horrible as you would imagine.

Hampden Park is around a 15 minute train ride from Glasgow Central, in the suburb of Mount Florida. Naturally, England and Scotland fans couldn't be trusted to travel together to the stadium and so we had completely separate trains that went to completely separate stations. The English station for the day was Kings Park which led to a merry dance around a housing estate to reach the stadium.

The Scottish FA are considering leaving Hampden Park when their tenancy agreement is up in the next few years and it isn't hard to see why. It just doesn't work as a football ground. The bowl shape means that the areas behind the goals are miles back from the pitch for seemingly no reason as there isn't even a running track. England were housed behind one of those goals and I was lucky enough to grab a spot in the back row. Even halfway down the stand the view becomes impaired and if you are at the front then the technical term for what you can see is better known as bugger all.

Scotland's poor performances over the last decade mean they also struggle to fill it apart from for the really big games. Taking the national team on the road and using Celtic Park and Ibrox when the crowd size demands it seems a much better option than another long agreement to rent Hampden from where I am standing.

Rousing renditions of both national anthems gave away to a pretty disappointing atmosphere in terms of what you would expect from the occasions. That probably wasn't helped by both sides looking very much like 22 players who hadn't played a competitive game for three weeks; the game being desperately poor for 70 minutes with man along the row from me being rumoured to have slipped into a coma through sheer boredom.

And then the last 20 minutes happened. Thank Christ there were two clowns in either goal as both goalkeepers belatedly decided to make things entertaining. Craig Gordon firstly made a total mess out of Alex Oxlaide-Chamberlain's shot to hand England the lead. The visiting support were crowing, the sound of "You're just a shit San Marino" bellowing around the ground. Scotland supporters could only offer a pretty feeble Icelandic Clap in response. Hey, at least we made a major tournament in 2016. And 2014. And 2012. And 2010. And 2006. And 2004. And 2002. And 2000.

That looked like game over but Leigh Griffiths and Joe Hart clearly had other ideas. Hart had already offered the only entertainment of the first half by wearing a baseball cap rarely seen outside of the school playground or in any game involving Chris Kirkland. Did the hat have magic powers? Possibly as without it, he was beaten by two virtually indentical Griffiths free kicks in the space of two minutes to turn the game on its head.

The roar that greeted the second could probably be heard on one of the moons of Jupiter as bodies went flying in the home sections and general bedlam broke out. I've never seen a goal celebrated so wildly and a special mention must go to the three disabled supporters at the front of the Scotland sector to England's right. They took the time in amongst the jubilation to wheel over to the away fans and celebrate in front of them with some standard middle fingers thrown in for good measure.

Glasgow looked set for a big Saturday night party until Harry Kane saved England's blushes in the 93rd minute with an equaliser that prompted hysteria of a different kind. If Griffith's ssecond gave Scotland unbridled joy, then Captain Kane's goal was an outpouring of sheer relieve. Thank Christ we didn't lose to them.

The final whistle blew at 2-2 with the unreported appreciation from both sets of supporters towards to each other. By the time we were finally allowed out of Hampden, there was only time for a couple of beers before I had to board the coach home while the others headed out for a night on the town and haggis bombs in the aforementioned Pop World.

Although when you think about it, there was only 105 minutes of pub time left between my departure for London and the calling of last orders anyway given midnight was approaching. Those beer laws really do need looking at ASAP. Sort them out, don't play at Hampden Park and then Scotland away might finally live up to the hype. 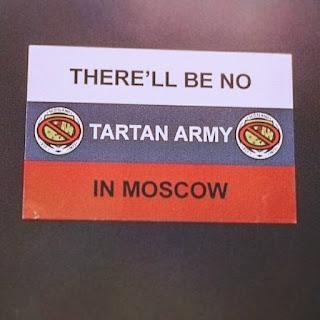 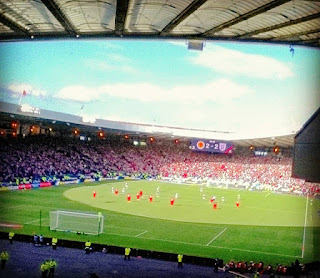 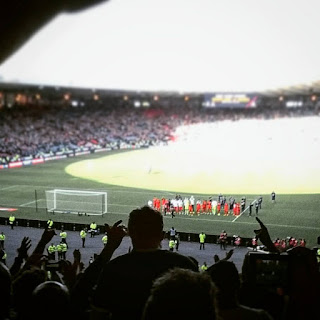