"Why would a suicide bomber blow himself up here? You won't find anywhere cheaper for a baguette and a Kronenbourg in Paris."


Think of your mothers birthday and what images come to mind? A nice bunch of flowers? A box of chocolates? Maybe even a good bottle of wine? My mother received none of those things this year. Her combined Mothers Day and birthday present was in fact a trip to the Stade de France to watch France v England in an international friendly.

This may seem odd. Plenty of people have been put off traveling to Paris due to the spate of terrorism attacks, one of which occured when a suicide bomber blew himself up metres from the turnstiles of Stade de France less than two years ago. And while plenty of mothers would've preferred those flowers or chocolates, Alison McCarthy wanted to witness Kieran Trippier's England debut. France away it was.

Alison's one previous experience of traveling away with England had come a year ago in the Euros. She sure knows how to pick her games, as on that occasion it was down in Marseille against Russia, an occasion played out to running battles throughout the city with locals and MMA trained Russians. Avoiding ISIS would be a walk in the park in comparison.

That Marseille trip had begun and ended in Paris, which meant that most of what there is to see had been seen. I'd returned a further two times to the city over the course of England's disastrous Euro 2016 campaign. I'd watched a game on the big screen in front of the Eifell Tower. Avoided being pick pocketed at the Louvre. Got a bad back at Notre Dame. Walked (illegally) thought the tunnel where Princess Diana died. Spent an evening drinking with two lovely ladies next to Moulin Rouge. Nearly been mown down on the Champs Elysee. Paris was, as they say, completed.


That meant it was just a quick trip for the final England game of the season. Arrive at Charles De Gaule at 10am on game day, leave at 8pm the following day. A straight forward plan in which nothing could go wrong, surely?

We had only been in the country for 10 minutes when the heightened security bought about after several years of terrorist attacks introduced itself as, for reasons that nobody still understands, the entire station at the airport was evacuated. This led to utter confusion as people just milled around outside with plenty of station officials doing that most French of things, the Gallic shoulder shrug. This was an ominous start to proceedings but after 10 minutes whatever the emergency situation was was over and it was off to the city centre via the Arc De Triomphe where we would collect our tickets.

This was the one sight Alison hadn't seen on our last visit and so she was probably the only England fan happy with the location of the collection point, given that the poor man's Marble Arch is miles out of the centre and most supporters passed through Gare Du Nord on arrival. Stick the ticket collection point at the cities main station? Don't be silly! If the FA had any common sense, they could be dangerous.

Alison's mood at seeing Arc De Triomphe improved even further with our accommodation near Notre Dame. Regular readers will know that being the tightest man on the planet, I always try and skimp on accommodation costs by staying in multiman hostel rooms, traveling on overnight transport or in some cases just sleeping rough.

On Alison's previous trip I had relented slightly and booked a hotel, albeit the cheapest one I could find. This turned out to be in one of Paris' red light districts which is the last place you want to be staying with your mother. There was relief all round then when an actual, proper hotel not surrounded by sex shops was our base for the trip.

Thankfully, I am blessed with a mother who likes her beer and so we were soon off to meet up with the rest of the Brighton contingent of Dean, Lewis, Ciaran and Mark. They had had an unsavoury incident with a large gang of pickpockets at Gare De Nord earlier in the day. Fortunately they had got out of it unscathed but after such events the only way to get over then is with several drinks and Alison and myself were only to happy to help in that regard.

With security said to be tight, we headed off to Saint Denis two hours before kick off. There were plenty of outside units selling alcohol around the stadium which vindicated the early arrival although one portaloo for 60,000 odd fans alighting at the station seemed wildly ambitious.

There were three security checks to get in and, in typical French style, it was absolute bloody chaos at all of them. The first was prior to the away turnstiles with fans being funnelled into a small gap tighter than nun. A cursory glance at any sort of paper that could resemble a ticket was all it took to pass that. After the stress of being crushed there, we had more beer from one bar directly outside the away turnstiles, Les Rendezvous.

This I discovered afterwards was basically the exact spot where one of the suicide bombers detonated his belt on that fateful evening in November 2015. If anything rams home how mad these people are, it's that he chose to blew himself when he could've paid £5 for a pint of Kronenbourg and a ham and cheese baguette. Practically giving it away by Paris' standards.

Of course there have been plenty more terrorist attacks since then, two of them recently in Manchester and London. Before this game, I was becoming extremely weary of what feels like the sense that every single international game these days has to mourn something or other just for the sake of mourning. Its become almost as if football associations and clubs are putting on these shows purely to say "Look at us and how caring we are". We had had a minutes silence three days previously at Hampden Park when playing Scotland away. Why did we need another one here, let alone French fans making a giant England flag or joining in with God Save The Queen or an Oasis sing-along befire kick off? Well, I take it back as it actually ended up being pretty moving stuff and it definitely helped the atmosphere inside the stadium for what was essentially a nothing friendly.

The Stade de France itself was excellent, three tiers and a sea of red, white and blue thanks to virtually every home supporter in the ground waving a tricolour around. The French were in fine voice and so were the English, penned in one lower tier corner. The huge gaps between the roof and the back of the stands in some grounds would mean a lot of the noise escaping but not here. Those gaps also allowed for a brilliant view of a quite beautiful sunset.

History was made for several reasons during the game itself. One being that this wasn't the normal sluggish and turgid encounter that friendlies tend to be. Second was Theresa May becoming the first Prime Minister in history to join in with a Mexican Wave. It was much reported that she was also the only English supporter in the ground to join in given the Three Lions support much heralded hatred of them but I am ashamed to admit this is actually fake news - Alison McCarthy herself joined in. She does have much to learn about England away yet.

Third was that we got to witness the first ever red card by video assistant referee. Raphael Varane was the man, sent from the field of play for bringing down Dele Alli in the box a few minutes into the second half after the referee consulted another official who had the benefit of television replays. There was a lot of confussion inside the stadium as nobody actually realised what was going on. It seemed to take forever from the awarding of the penalty to Varane being flashed the red card and it wasn't until reading reports afterwards that we knew we'd witnessed a piece of history. Clearly, communication to the crowd needs to be improved as does how quickly a decision can be made. Early days, but those who said video referees wouldn't affect the flow of the game may have to reconsider.

That penalty allowed captain Harry Kane to equalise for England. He had put them 1-0 up in the first half, only for Samuel Umtiti and Djibril Sidibe to put Les Bleus ahead at the break. France were not all full strength but they still looked far better than England with the Three Lions relying on Tom Heaton and then Jack Butland to prevent the game running away from them. Ousmane Dembele scored France's winner and despite playing against 10 men, England couldn't find a way through. 3-2 it finished, a far cry from the snoozefest against Scotland three days earlier.

After the game we returned to the Jihadi Bar for more Kronenbourg and to let the crowds die down. It was all very relaxed as French and English supporters swapped flags and stories. Remarkably, we found something to do on the Wednesday before the fight home with a visit to Parc Des Princes to have a snoop around the home of Paris Saint Germain.


PSG are excellently located in what must be one of the finest sporting quarters of any city in Europe given that Rugby union side Stade Francais have their stadium next door and Roland Garos is just across the road. Three sporting venues ticked off in 30 minutes - and there was me saying there was nothing left to do in Paris.

Steak and beer in the Chatelet area of the city wrapped up Alison's birthday treat. "What might you want next year then?" I asked her as we headed back to Charles De Gaule afterwards for the short hop back to Gatwick. A ticket to England's first group game of the World Cup in Russia was her reply. Yeah, we might need to take a rain check on that one. 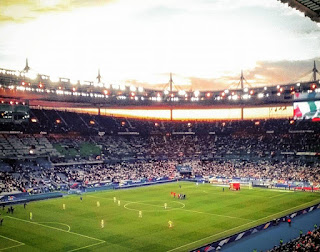 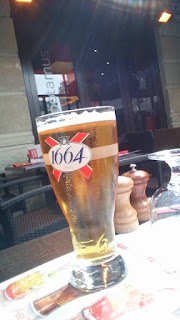 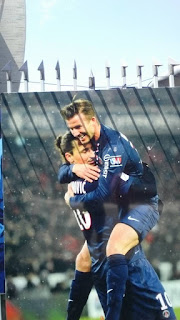 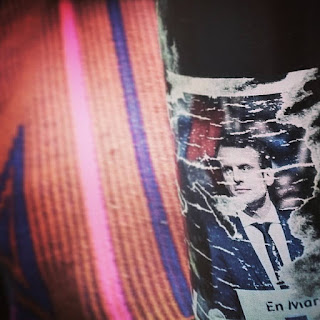 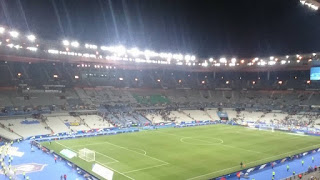