"If more clubs played Gloria Gaynor at full time I'd be inclined to stay until full time rather than leaving five minutes early to get back to the pub."

Dutch football is bloody fantastic. Yet for some reason it has never become a fashionable destination like its German counterpart.
While supporters from across Europe flock to venues such as Signal Iduna Park to watch Borussia Dortmundtourist - been there, done that, got the t-shirt twice - nobody seems to take much interest in what is going on across the border in the Netherlands. Perhaps it is Dutch clubs reputation for stringent membership schemes. Or the banning of away supporters for high profile matches. Or the threat of hooliganism. Or the vicious rumour that it is nigh-on impossible to get tickets for games. Well it wasn't impossible for our Dutch Double Header. A quick e-mail to two of Rotterdam's finest in the form of Feyenoord and Excelsior and we were on our way to the city that made The Beautiful South famous. This could be Rotterdam or anywhere...

Our request for tickets for Feyenoord might have been helped by the fact we mentioned we were Brighton and Hove Albion fans. Last summer, Brighton parted with £1.5m for Feyenoord striker Elvis Manu who has turned out to be, for want of a better word, crap. You can imagine the scenes in the ticket office now as the e-mail came in. “Oh God, two Brighton fans want to come and watch us play. I suppose it’s the least we can do seeing as we mugged their club off for over a million quid for a player who doesn’t know the offside rule.”
Taking in two games at a time on these trips always seem like a good idea on paper. But paper doesn't have to deal with two days of solid alcohol consumption. Which is followed by an 8am Saturday morning flight from Rotterdam Airport to Manchester. On a propeller powered plane. Throughout which you are desperately trying not to add "above the North Sea" to the list of places you've been sick.

Why were we flying into Manchester airport? Ah, well just to add to the weekend of football, Andy decided in his wisdom we could go and watch Wigan v Brighton as it was "on the way home". It did actually prove to be a prudent move given the Albion won 1-0 to go second in the Championship which was remarkable as, as we wobbled dangerously somewhere over Yorkshire, it seemed at the time to be as good a decision as when Mr and Mrs Hitler got a bit randy and headed to the bedroom. But I digress. Back to Dutch football. Which is bloody brilliant. Our chosen game at the fabulous De Kuip was Feyenoord taking on Ukrainian side Zorya Luhansk. A couple of weeks before our visit, Zorya had travelled to Old Trafford to take on the not-so-mighty-anymore Manchester United. They had, according to The Times, taken a grand total of five supporters with them owing to the troubles in war torn Eastern Ukraine where they are based (although they now play "home" games in Zaporhizia, a mere 236 miles away).  In honour of the dedication of the fantastic five, we had decided to secretly give our backing to Zorya despite being in among the home supporters. That was until we headed out into Rotterdam and were blown away by the cities passion for football which instead saw us pinning our colours firmly to the Feyenoord mast. Across our travels we met not just Feyenoord and Excelsior supporters but Sparta Rotterdam and bizarrely a Dutch Bradford City supporter. It takes all sorts I suppose.

Central to these meetings were the plethora of bars we came across in an area of the city which was named 'Cool District'. Our decision to hang around here and not venture too fat away in the hope of finding a 'Groovy Borough" or a 'Wicked Boulevard' was vindicated as we ticked off no less than nine pubs. Easily the best of these was Café Visser, which featured a scary Santa Claus doll just the two months before Christmas, some weird porcelain dog figure with a set of flowers coming out of its head and a large poster of George Best. Football mad and probably genuinely mad.

Our hotel for the two nights was also handily located in Cool District. This was the first time I had stayed in an Easyhotel and it was everything you would imagine a hotel run by Sir Stelios would be. Check in on line, the most budget of budget rooms, extra charge for tea and coffee. The only disappointment was there was no speedy boarding for the shower and no option to pay extra to reserve a chosen bed.

From Cool District it was a 10-15 minute tram ride over the river to the Feyenoord area of the city. The first thing you notice about De Kuip are its floodlight pylons. With the ushering in of modern, all seater stadiums proper floodlights you can see for miles away have all but disappeared in favour of boring lights strung along a roof. But not in Rotterdam. De Kuip features four beautiful pylons reaching high into the sky. Floodlight porn, some might say.  Once inside the stadium, the lights peer down over the roof illuminating the pitch below. Two tiered all the way around and in a bowl shape with a low hanging roof, it ticked every box that features on the excellent stadium checklist. The floodlights, well you are probably bored about hearing about those gorgeous metal creatures by now. The player’s tunnel was the opposite side of the stadium to the dugouts which led to a fantastic procession of coaching staff, medical teams and substitutes at the start and end of each half. And then we come to the atmosphere.

De Kuip was partially shut this fine Thursday evening. UEFA had dished out a suspended sentence punishment of a future game behind closed doors after crowd trouble in a Europa League game there last season against Roma. As a result, Feyenoord took it upon themselves to close the front half of the lower tier in a bid to prevent a repeat. Preventative action if you will. This meant around 16,000 seats in the 51,000 capacity stadium were covered up which you would expect to impact on the atmosphere somewhat. Not a chance. The place was raucous throughout, none more so than when Nicolai Jorgensen scored the only goal of the game. There was even a green flare let off in celebration. If it could be that loud in a game which did nothing to excite with a third of the ground shut, imagine what it would be like when Ajax come to town. Add that one to the bucket list.

One of the loudest songs of the night was "Don't take me home" which seems to have caught on since it was sung relentlessly by England supporters at Euro 2016. This is a real bugbear of mine as it should surely only be sung when you are away? You can't be taken home if you are already at home, can you? England fans who persist on singing it at Wembley, take note.

That wasn't the only English thing about the evening either as the football was reminiscent of the on-the-pitch-tripe served up by England in their last four games. There were just four shots on target, all from Feyenoord. Brad Jones of Liverpool and Middlesbrough fame cold have bought out a chair and a book he was so underemployed in the Feyenoord goal. Perhaps this is the reason people don't flock to Dutch games. Certainly not those against limited Ukrainian opposition on a Thursday night.
There was one last treat at the end to make up for the mind numbing boringness of the 90 minutes. Plenty of clubs have a song that they play on the full time whistle. But none are as good as Feyenoord pumping out Gloria Gaynor and I Will Survive, complete with supporters joining in as they file out of the magnificent De Kuip. Dutch football. Bloody brilliant. 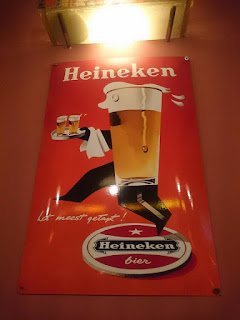 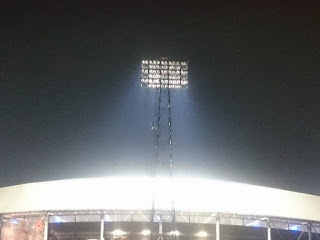 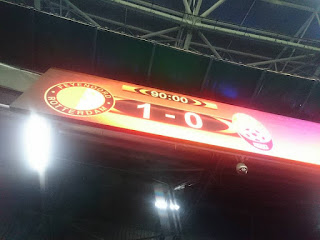 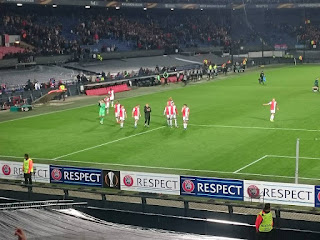