"You've come all the way here from Brighton? Bloody hell."


Looking for Eric has to be one of the most preposterous ideas for a film ever with the possible exception of Snakes on a Plane. For those who have never heard of it, it goes something like this:

Man's life is falling apart. Man considers suicide. Man smokes marijuana. Man has vision of Eric Cantona. Eric Cantona guides man through the rest of the film to a happy ending. Day two of our Rotterdam trip could have been the sequel to this - Looking for Danny.

The Danny in question was Dutch midfielder Danny Holla and although there was no suicide, midlife crisis or weed involved, we were on a mission to find him. Why Danny Holla? Because he’d spent two years at Brighton and Hove Albion. Until the last five years or so, Brighton were pretty rubbish and so it was rare for a player to leave the Albion and head for foreign lands. They were more likely to be heading for non league. We’re still not used to this whole supporting a good team thing and so once Holla was released and we got wind of the fact he had signed for PEC Zwolle, taking in their Eredivisie visit to Excelsior was a no-brainer.

But before the Friday evening game at Stadion Woudestein, there was another Danny Holla related part of the trip to get through. Holla had signed for Brighton from ADO Den Haag and, the Netherlands being a small country with impeccable public transport links, we decided to spend the afternoon in Den Haag, or The Hague as it is known to us English. The Hague was a brisk 20 minute train ride from Rotterdam and once there we were able to do some actual “sightseeing” which for once didn't consist of the inside of a pub. The city is home to the Dutch government, parliament and Supreme Court despite the fact that the capital is Amsterdam. It is also home to the International Criminal Court which is where we were headed for a look around.

With a disappointing lack of ongoing war crime trials, we spent just 30 minutes at he ICC, after which it was back to the city centre where we belatedly discovered a square with lots of outdoor drinking facilities. That was the end of any plans to go and visit Kyocera Stadion, home of ADO Den Haag as we were unable to leave the hospitality of the square and it's beers before journeying back to Rotterdam.

Although sad not to have made it to one of the grounds where Holla used to play his trade, there were two positives to this. One was that Den Haag wear an absolutely brilliant combination of yellow and green stripes as a home kit, which would almost certainly have led to an obscene an amount of money being spent on merchandise. The second was that by not visiting, we have full justification to go back for a Den Haag game at some point in the future.

Back in Rotterdam, we decided to chance the 30 minute walk from the centre to Stadion Woudestein which meant that the walk soon turned into a near two hour trek as we decided to stop at five different bars along the way. The best of these was Cafe Hoekzight, a bar with lots (about eight) of supporters heading to the evening's big game as well as a huge poster of a naked lady inside the gents toilets. Only in the Netherlands.

It turned out that it wasn't just Danny Holla we would be paying homage to on this trip either. Excelsior was the club that produced Robin van Persie and to say they are proud of it is something of an understatement. We would be positioned for the evening behind the goal in the RVP Stand and in the supporters bar there was an entire wall dedicated to the former Arsenal and Manchester United man.

One thing that makes trips to these smaller clubs enjoyable is the supporters bar and Excelsior has one to rival the best of them. Cheap, cheerful and housing a cupboard which doubles as the club shop, the best bit about it is it features a porch that directly overlooks the pitch and you can take beer from the bar straight to your seat. One bloke didn't even bother to leave the bar - we discovered him at half time in exactly the same position watching the television as we had left him in as the teams appeared for kick off.

The RVP Stand was raised above the pitch and was a curious mixture of seats with a block of terracing in the middle. At the other end the PEC Zwolle fans had gathered, a remarkably large number for a Friday night round trip which at 180 miles is one of the longest in the Eredivisie given they came into the game bottom of the table. The Holla effect perhaps?

The match itself wasn't too entertaining with the first half in particular a complete non event. Half the Excelsior fans were still refuelling in the bar or taking advantage of the crepe stand (crepes at football - take note English clubs) when Zwolle took the lead through Ajax loanee Queensy Menig with the second half just three minutes old.

Excelsior pushed forward in search of an equaliser after that but Zwolle kept them at bay, adding a second on the counter with two minutes left to play through Django Warmerdam - another player on loan from Ajax. Excelsior 0-2 Ajax some might say. While the majority of Excelsior supporters slunk off back to the city, a fair few which included us returned to the warmth of the bar. Those downing the Jupiler included a large number of fathers and we soon discovered why when peering out of the window to see lots of kids having an impromptu kick about on the pitch. Tempted as we were to go and join them - who doesn't want to tell their Grandkids about the time they scored at Stadion Woudestein? - they looked quite good and, after Euro 2016, English football is far enough in the doldrums as it is without two pissed up blokes being given the run around by a load of Dutch under 10s.

So we stayed in the bar which was a wise move. Not content with serving great beer, around 30 minutes after the full time whistle any food that had been cooked but not eaten was offered around for free. Eating a complimentary meat thing that looked suspiciously like a sausage yet wasn't while looking at a wall decorated with Robin van Persie’s face. Does life get any better?

It does actually. Up pulled the PEC Zwolle coach and from the sanctuary of the Main Stand the visiting players began to board. Beer necked, sausage that wasn't sausage eaten, we headed outside and five minutes later found ourselves being greeted by the very man we had come to see.

“You've come from Brighton?” Mr Holla expressed with a look and tone of bewilderment, clearly torn between admiration for the cause and concern that we should be in a secure mental facility somewhere. He was kind enough to chew the fat for five minutes, expressing disbelief that Brighton didn't win promotion to the Premier League last season (we missed out by two goals) and that he hoped it happened this time around. The feeling was mutual, we told Danny - we hope you and Zwolle can stay up.

They are making a good fist of doing that as well, having moved from the bottom of the table position they occupied before the Excelsior game up to the dizzy heights of 11th at the time of writing.

As for us, we headed back to the Excelsior fan bar until we were eventually kicked out, catching a tram back to the city centres Cool District to party the night away. The next morning it was a 9am flight from Rotterdam to Manchester and onwards to Wigan, where Brighton picked up a 1-0 win to go second in the Championship.

Looks like both Zwolle and Brighton could get what we hope for by the end of the season. In which case, keep your eyes peeled for Looking for Danny Part 2 next season. 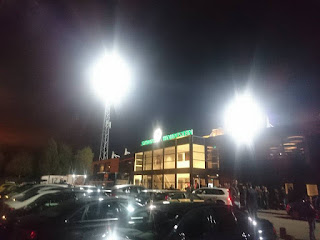 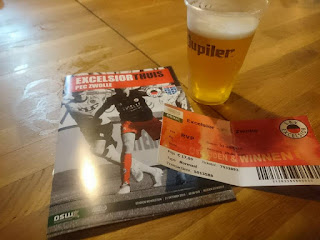 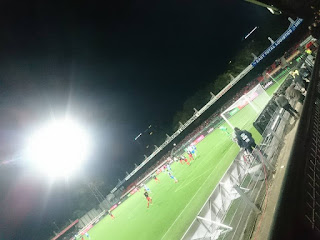 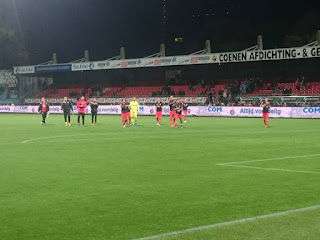