This was in fact the Lukasz Podolski tribute match. After 130 games, 48 goals and one World Cup winners medal, this was Podolski's final game for Die Mannschaft in front of a capacity crowd who had turned out to worship him at Borussia Dortmund's Signal Iduna Park.

The love in started before kick off. Podolski captained the side; there was a delightful video played in his honour on the four giant big screens in each corner of this footballing cathedral; he then even made a speech to the masses.

Can you imagine England's only comparable international in the form of Wayne Rooney being feted in that manner at Wembley if he ever calls time on his Three Lions career? If it did happen, you can bet your life that some cretins would boo throughout. Which is what some of the more pond life like element of the away support did here with sad predictably.

Podolski had the last laugh though, scoring a quite brilliant goal - number 49 - from a full 30 yards before departing to a standing ovation as the music from Gladiator was played. That was frankly ridiculous but it did beg the question, why aren't movie title tracks utilised more when substitutions occur? Find me someone who says they don't want to see Raheem Sterling being replaced to the sound of My Heart Will Go On from Titanic or Eric Dier exiting proceedings to Beauty and the Beast's Be Our Guest and you will have found me someone lying through their teeth.

It wasn't just a productive evening of work for Podolski either as yours truly managed to visit European country 28/42 on this trip by going via Luxembourg. There were two reasons behind what looks on paper like a ridiculous route to have taken. The first was that this was my third visit to Dortmund and so rather than go to a town that is, footballing reasons aside, pretty dull, it was a good opportunity to visit somewhere new. The second was that given than Luxembourg City is not somewhere many people choose to go to for anything other than business, flights to and from Europe’s fourth smallest country and travel onwards to Dusseldorf came in at less than £50. Strap me in.

That travel came in the shape of an overnight coach from Luxembourg to Dusseldorf which didn't leave until 5am Wednesday morning. The plan therefore was simple. Don't bother booking any accommodation, just find a nightclub and wait until the early hours, jumping straight on the bus and sleeping for the duration of the five hour journey across the border and into the heart of the Rhineland. This approach had worked very well when travelling from Munich to Ljubljana for Slovenia away back in October and there was no reason to assume it wouldn't work here.

Except of course that Munich is a city renowned for its drinking culture and has a wealth of bars. Luxembourg City is frankly on a par with Blackburn for its Tuesday nightlife, although with what I suspect is a slightly more lively prostitution scene if the number of girls standing around on street corners, actively offering their wares like something from a Victorian novel was anything to go by. Things did originally look promising for the "spend all night drinking" plan when I stumbled across a bar in which a huge party was kicking off. That was until every custodian buggered off at 1am, leaving just the four hours to kill traipsing around the city freezing cold and then waiting at the bus stop. Who says following England away is all glamour?

Other than spending the night on the streets, things went well and Dusseldorf was reached by 10am on game day. That left enough time to pick up a bratwurst for breakfast and meet friends Lewis, Ciaran, Mark and Dean for several beers.  Much like it's near neighbour Cologne, Dusseldorf is an excellent drinking city which specialises in 0.2l beers. Finish one of those little beauties and the barman will instantly bring you another. This will keep happening until you place your beer mat on top of your last empty glass to signal no more. Rather than the Kolsch you get in Cologne, in Dusseldorf it is Altbier, a darker, heavier beer that tastes similar to pale ale. Four of those in the famous Schumacher Brauhaus (unfortunately not named after Michael) and it was off to Dortmund.

Being a resident of Sussex and therefore a frequent victim of Southern Rail's train 'service', trips to Germany are always refreshing to experience how a train system should work. Imagine the horror then when our train to Dusseldorf was delayed by 20 minutes, surely an unheard of occurrence in a country famous for its efficiency and punctuality? Deutsche Bahn do not even have a delay repay scheme in place unlike Southern. That wasn't the end of the transport woes either as Dean and Co's taxi crashed once we arrived in Dortmund on their journey from station to hotel. Another myth surrounding Germany - that they are excellent drivers - was shattered.

After a few beers in Markt Square where several hundred England supporters had gathered for the traditional boot football as high as possible into air game, the car crash survivors and myself headed away to a restaurant serving what can only be described as the greatest schnitzel I've ever had was served. Such was the quality of this piece of pork wrapped in breadcrumbs that not even the fact the place was packed and we had to sit outside in the cold could take away from the delight of the meal.

From there it was onto Signal Iduna Park. The local police had instructed England fans to get off at a certain U Bahn stop as they wanted to ensure everyone got straight in the ground with no mixing with the home support. Needless to say we weren't having any of that and got off a stop early, walking to the stadium, outside of which there were plenty of outlets selling cans of beer and where you could mingle with the Podolski supporters. We even had time to have a 100m race on the athletics track adjacent to the main stand and then a go at the long jump. Neither performance in these events was particularly impressive.

After collecting some complimentary Germany flags which went down a treat with our fellow England supporters and obtaining some "selfies" with the members of Die Mannschaft's triumphant 2014 squad which are painted on the side of the same double decker that was in Berlin for last year's friendly, it was off into the stadium. My previous two visits to watch Dortmund have come in the light yet the place was even more magical in the dark, four steep stands including the famous Yellow Wall opposite us were shrouded in darkness, surrounding the pristine and brilliantly lit green carpet below.

The away section is up with the God's but the England fans created quite a racket. So much in fact that there was something of a backlash from the FA and the press about some of the more outdated war related chants. Bad tasting? Yes. Disgraceful? No not really when most of the German football supporters I've become friends with down the years through these trips don't mind a laugh and a joke about their past. The anger and outcry smacked of the current trend of people taking offence on other people's behalf.

Gareth Southgate took a bold approach by playing the fashionable-thanks-to-Antonio-Conte 3-4-1-2 formation and it largely worked as England played surprisingly well, only being undone by that moment of magic from Podolski. There were a couple of chances to get on the scoresheet but not enough to convince Coventry Sara and myself to stay for the final 10 minutes, given we both had to get the 23.15 from Dortmund back to Dusseldorf.

It was at this part of the journey that one of the stranger things you are likely to see at a football game appeared as a German supporter in his 50s rocked up carrying a toy of Ernie from Sesame Street. There seemed to be no logical explanation for this but the bloke seemed happy enough to pose for a selfie. No doubt some members of the British press and the FA would see this as a disgraceful piss take as well in which case I look forward to having my England Supporters Membership revoked.

One of the key elements in making a three day trip with no accommodation work is making sure you don't fall asleep in random places before the overnight travel element. This can be quite difficult if, say for example, you have had 10 pints across 14 hours on only five hours sleep. The trick is not to sit down, keep moving and find something to occupy yourself.

Well here we were back at Dusseldorf Station, 20 minutes before the train back to Luxembourg when I made the cardinal mistake of sitting down in the waiting room. The result? Waking up two hours later with my booked train long gone. This was even more ridiculous in light of the fact that there was a bloke physically lying on the floor of the waiting room sleeping when I entered it whom I heartily laughed at owing to his stupidity for getting into a position whereby he was almost certainly going to miss his train. There was egg well and truly on face when I was finally shaken out of my slumber at 4am, 90 minutes after my train pulled out of the station.

Thankfully, the ticketing guards were very understanding of the situation, no doubt still basking in the glow of Podolski's perfect farewell of the previous day. Luxembourg City was eventually reached at 10am and what with it being daylight this time, the chance to explore was taken.

It may be a boring place but it is actually a quite beautiful one. There are plenty of old buildings and a park running through the middle of the city in a valley. There is also the Stade Josy Barthel Stadium, a 20 minute hike from the city centre and home to the famous Luxembourg national team. Unfortunately there was no way in as the place was being prepared for the visit of France 48 hours later so a few photos from the outside had to suffice before heading back into town to do the only thing left to do until the flight home at 9pm - namely, drink some more beer in several more bars.


As is normally the case, this drinking killed the remaining hours of the day and gave the chance to reflect back on a successful time for all concerned. Lukas Podolski got the send-off he deserved and I ensured Luxembourg is done and dusted and I won't have to go back there again*

*Until England inevitably draw them in qualifying for Euro 2020 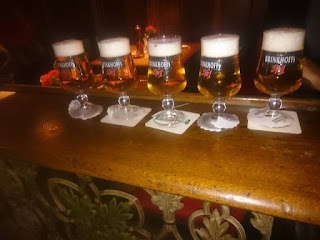 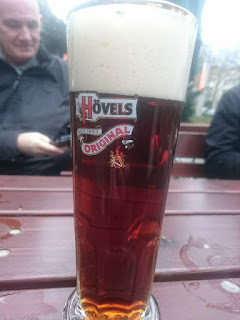 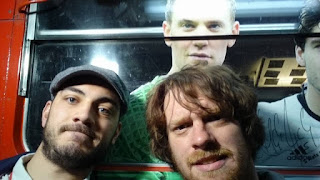 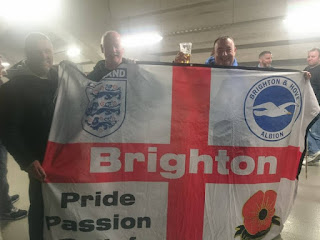 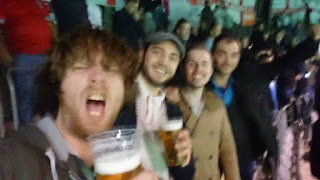 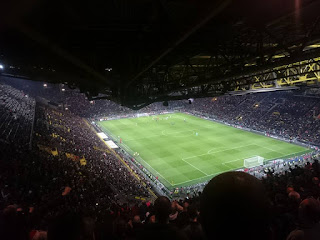