There is more than one team in Munich, don't you know? While Bayern may be famous around the world, playing in their shadow in 2.Bundlesiga are city neighbours 1860. Originally named because they were founded in 1860, they used to be the cities big boys and were even German champions in the 1960s.

Hard times have followed though, mainly since the move into the vastness of the Allianz Arena took place and they struggle to even third fill one of the worlds finest footballing venues. They need all the help they can get and that is where a group of six upstanding males came in for the visit of Hansa Rostock FC.

Of course, this wouldn't be German football without sinking a couple of pints before the game. And in Bavaria, these pints come in the shape of steins, two litres of wholesome family beer. We weren't quite as hardcore as those Hansa fans who were at the hotel bar doing shots at 8am in the morning but nonetheless a fair amount of beer was put away in the Augustiner Keller and the world famous Hofbrauhaus before the game.

The Allianz is about a 20 minute journey on the typically efficient U-Bahn service from the city centre. 30 minutes if you end up going the wrong way which is naturally what happened. The ground itself is in the middle of nowhere, a giant marshmallow surrounded by wasteland.

There is a shopping centre adjacent to the station which, this being Germany, features a bar where you can continue pre-game drinking right up until kick off. 1860 tickets are available on the door unlike their more illustrious rivals and despite requesting a place in the terrace, we ended up with tickets for the seats.

Or at least we were meant to. Given how sparse the 1860 support was, we were able to wander onto the terrace once inside the stadium with ease. And it was here we met all manner of weird and wonderful individuals. From the home fans drummer - a more pleasant smelling version of John Portsmouth FC Westwood - to people wearing full kit, it was a mixture of the sort of bizareness you'd struggle to find anywhere else.

When full, the Alianz must be an impressive place but on this occasion it was like a morgue. Nobody in the top tier, a splattering of people in the middle and even less in the bottom led to no atmosphere at all. It was like attending a funeral in Westminster Abbey in which just two people turn up.

But that didn't effect the quality of the game in the slightest. In fact, it must rank as one of the most exciting games I've ever seen. Manuel Schaffler gave 1860 the lead, Enrico Kern and Mario Fillinger put Hansa 2-1 up before the break. Benjamin Lauth equalised with Kern netting his second for the visitors with 85 minutes on the clock. Game over? Oh no, a brilliant 93rd minute free kick from Sascha Rosler earning a point and sending the home fans wild.

And by wild, I mean throwing pints of beer over the segregation and into the away fans. Naturally, we had to sample everything German culture has to offer so this meant joining in and giving it large - before running away after realising that a group of English fans, one of whom wearing a bright yellow t-shirt with Mark McGhee's face on it - wouldn't exactly be hard to find for retribution later. Wimpish yes, but none of us are exactly Elijah Wood in Green Street.

Munich is one of those fantastic sporting cities with plenty to do and see, and we spent the next day at the Olympic Park wandering around and taking standard "5-1 poses". Unfortunately we couldn't get into the actual stadium as some noddy band called ACDC were setting up for a concert. Bloody inconsiderate, really.

Away from the bierkellers in the centre, we came across a vast complex on the edge of the city that was like an English industrial estate - think where The Office is based in Slough - but was just full of varying nightclubs. Including a gay one, as young Sam found to his cost when chatting up a woman who actually turned out to be a man. I even got some action when a burly man put his hands on my bottom, which is a very brave move given the combination of beer and german sausage was like letting Hiroshima off in my innards. You could arrive at this estate at 10pm and before you knew it it was 6am - as we found to our cost making the taxi ride of shame home with the sun up and the birds singing.

Perhaps the most important lesson from this trip to Munich however came from the realisation of the ultimate way to sober up. The German way to sober up. Dancing in a fountain on the cities main street. It's not frowned upon, in fact it is fully encouraged. As Jeff Stelling would put it, they were dancing in the streets of 1860 Munich. 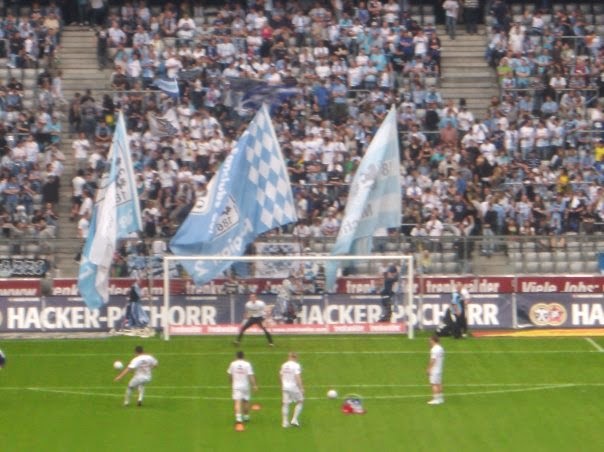 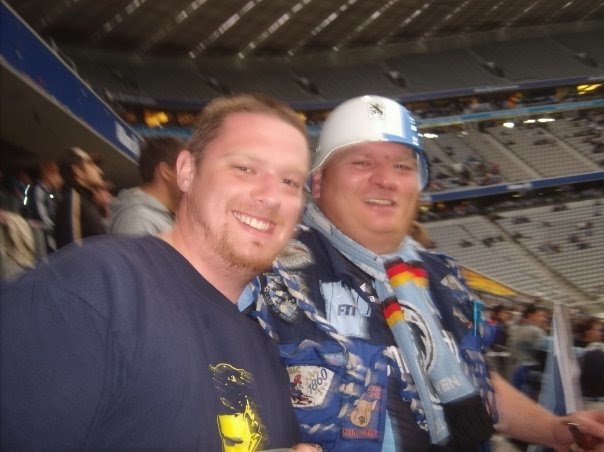 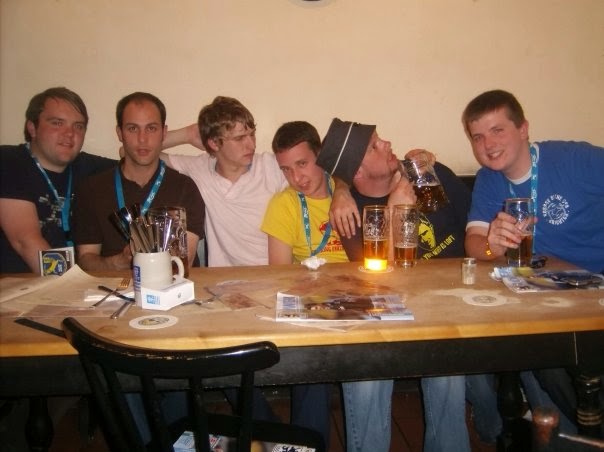