"If Wolfsburg are going to lose this game then I hope it is 9-0 so we get to hear Zombie Nation eight more times."

It sounds like a dream inspired by a combination of the strongest gouda and edam imaginable - a street that features 50 different bars with names such as Sgt Peppers and the Tipsy Duck. But this is no dream, no figment of the imagination like Diagon Alley (sorry kids, Harry Potter isn't real). It exists and is alive and well in Eindhoven, the latest destination in the Vfl Wolfsburg 2015-16 Champions League tour.

It's name is Stratumseind and it isn't particularly long. It stretches just the 200 odd metres from the imposing figure of St Catherine's Cathedral down to the River Dommel but in that space it has packed in a plethora of licensed venues varying from nice cafes to traditional English pubs to smokey venues that pump out European dance music into the early hours. Yes, we're talking 2 Unlimited.

Two away games into Wolfsburg's first Champions League campaign since 2009 and only the second ever in the cubs history, finding gems like Stratumseind has represented one of the few highlights of going away with Die Wolfe so far. The home form for Dieter Hecking's men has been good - two games, two victories over both their opponents here PSV Eindhoven and CSKA Moscow. Away from home, not so good as they arrived in the Netherlands having lost their only game on the road against Manchester United at the end of September.

That hadn't stopped several hundred Wolfsburg fans making the four hour trip via coach and train while we'd headed there by flying into Amsterdam and then catching a 90 minute train. Complete with train beers, of course.

It wasn't just Strastumseind that highlighted the best of Eindhoven's drinking holes. Eindhoven is after all a big university city with plenty of places for students to go and that meant we got through our fair share of beer - into the double figures of pints, gulp - before kick off at the Philips Stadion.

And the Philips earned Eindhoven another tick in the box, being one of those all too rare a breed of grounds that is bang in the city centre. Being little more than a ten minute walk from Stratumseind we joined a friendly PSV fan who not only showed us the way but then bought us a beer from the stands that had been handily set up around the stadium. "F**k UEFA, if they don't let us drink in there we drink out here". Couldn't agree more, mate.

The Wolfsburg support was kept high in one corner of the stadium with a pretty poor view of the action. The ground itself appeared excellent from up in the Gods with the steep stands packed with beered up PSV fans and a rocking atmosphere that was no doubt helped by the home sides dominance of the game which they went onto win 2-0.

Jurgen Locadia and Luuk De Jong were the goalscorers as PSV kept this wide open group even more wide open than it was before kick off. The 1990s dance music wasn't restricted to the pre and post game partying either, both PSV goals and the traditional end of game lap of honour being carried out to the brilliant tones of Zombie Nation and Kenkraft 400 which was incidentally one of Rumble's top remixes back in his days of being a London DJ. Could this place get any better?

Well, yes it could. All those Wolfsburg fans not traveling back on the coach that evening - and there were quite a few madmen planning on staying up all night to catch the 6am train home - were ushered back into the ground and walked around the perimeter track to get out. Which gave a much better perspective of what a fantastic ground the Philips Stadion was if you weren't penned into a corner up in the clouds.
Post-game entertainment? Well that was pubs giving out free firemen and police helmets and fireworks and flares galore going off. Rumble kept up his fine record of falling asleep in foreign night clubs. And I woke up the next morning in the hotel covered in stolen butter. All on Stratumseind of course, the greatest street in the world. Unofficially. 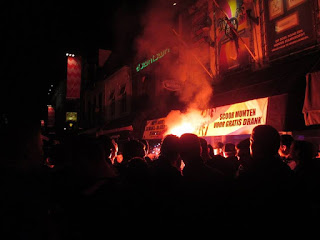 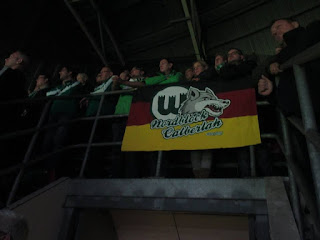 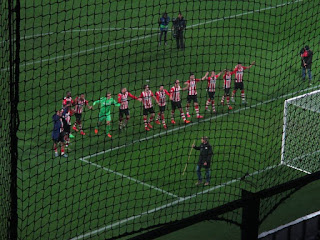 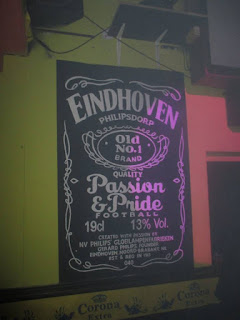