"I probably should have warned you before we booked a boat down the Danube that I was once seasick when totally sober on the Isle of Wight ferry."

Of all the great philosophical questions throughout human history, one has never been truly answered - what happens if a man who suffers from notorious seasickness visits 27 pubs over 72 hours in two Eastern European countries and then takes a boat up the Danube?

England playing away in Slovakia finally gave us the chance to answer it once and for all. The plan was simple. Fly to Budapest on Friday for a night out; bus to Bratislava for a Saturday evening of more beer; train on Sunday to Trnava to witness the first game of the Big Sam revolution and then the ultimate test - a boat from Bratislava to Vienna along the Danube.

The Danube is a bloody fantastic river so whatever sickness might occur would be a price worth paying. From its source in Germany, it passes through Austria, Slovakia, Hungary, Croatia, Serbia, Romania, Bulgaria. Moldova and Ukraine before emptying into the Black Sea. Sailing the length of it with a football game in each country would be quite the European Football Tour (makes mental note for next years 30th birthday).

But first things first. Destination one – Budapest. It wasn’t hard to see why this has become an extremely popular city with stag and hen parties alike. At around £1 a pint if you headed off the beaten track – which proves a vital tactic if you want to avoid the aforementioned stag and hen do’s – it is very cheap. There are also a plethora of pubs. I hardly scratched the surface having spent the morning and afternoon sightseeing yet still managed to visit 13 in less than 36 hours.

All of those pubs were in Pest on the eastern side of the Danube. Buda sits on the west and they were separate cities until 1873 when unification occurred. Buda is home to the cities castle and provides a stunning view of the Parliament building situated the other side of the river so technically I can say I did two cities in Hungary as well as visiting the biggest Synagogue in Europe, the site of the Ferenc Puskas Stadium which is currently being completely rebuilt except for the fantastic old school ticket booths and the iconic statues of Heroes Square. And there you were thinking this was a trip dedicated purely to drinking.

The Hungarians are a laidback and friendly people which you would expect when you can have Jägermeister for 80p. The only time they became anywhere near angered was in a karaoke bar in the early hours of Saturday morning. By this point I’d met up with the rest of the scientists aiding the sea sickness experiment – Mark, Fiona and Kevin – and the former two had performed a wonderful version of Nightboat to Cairo. My version of Delilah was not quite received in the same way, not helped in part by the fact I was unable to read by this point and this resulted in being removed from the stage area. It turned out that we had wandered into some sort of X Factor Finals night style levels of ability competition that the locals were taking very seriously. And I thought butchering one of Wales’ favourite sons most iconic anthems in Cardiff once had bought a bad reaction.

After a night asleep on a table in a corridor in my hostel due to being unable to find the correct room, Bratislava was next up which entailed a three hour bus journey. Bratislava is, I am reliably informed, a beautiful city with its own castle situated high above the Danube. And being reliably informed is all I have to go on in this instance as the one photo I took of Slovakia’s capital city was a blurred effort at night of the castle such on the mission to visit a number of bars on stationary boats along the river.

One rule of McCarthy’s Football Travels is that, where possible, you must always imbibe the local brew. Bratislava proved troublesome when it came to this, as nowhere seemed to sell Slovak beer – it was all from the near neighbours the Czech Republic. One barman explained why this was in brutally honest terms. “Slovak beer is shit, Czech is better.” Cheers mate.

There was still hope of finding some local stuff – the game itself would not be played in Bratislava but in Trvana, an hour journey away by train. With a population of 65,000 and so many churches it has been named the Slovak Rome, perhaps this would be the place to try beer from the country we were actually in. Or if worse came to worse, some communion wine.

Ah, but this was England away and the first England away game since our reputation had been done the world of good since visiting Marseille in the Euros. That meant that in a mysterious coincidence quite a few bars on the main street had “run out” of beer. And the first two pints we were able to find in backstreets? Pilsner Urquell and Bernard, two of the Czech Republic’s finest. We even had to resort to pre-game cocktails as the thousands of riot police and their dogs lay on the ground in the searing heat – one officer felt so threatened he’d dozed off while his colleague devoured a kebab – such was the trouble they faced in policing the rowdy English hooligans.

City Arena was handily placed slap bang in the middle of the city which meant a nice leisurely stroll. It is the home of Spartak Trnava and was completely rebuilt between 2013-15, during which time Spartak continued to play there in front of just one stand. As a result, the new stadium has the highest UEFA ranking of any in Slovakia and has become home to the national team.

Thanks to a quite spectacular cock up from the FA, it was the local supporters who I would be joining for the evening. Despite having been given a ticket in the England fans ballot and carrying out a transaction to purchase one, somewhere down the line something went wrong which left me ticketless. Thankfully, England are not the draw they once were and for €35 – which ironically worked out at less than I would’ve paid to get in the away end – I was in the home end.

There was a new experience on entering City Arena which involved having a photo taken before entry. Each turnstile featured a small camera you had to stare into, presumably so if you caused any trouble inside you were easily identifiable by the name on your ticket. No need to worry Slovak man whose name I was using – I behaved like an angel, even if it was far from ideal being among irate home supporters when Adam Lallana banged in a 93rd minute winner.

City Arena was a tiny but smart ground, two tiered all the way around except for one small single tiered stand along one side. It was reminiscent of stadium:mk in that that concourse occupied the gap between the two tiers and as such you could walk around it, buy food and drink beer all in view of the pitch. The pitch itself began cutting up almost immediately, although that couldn’t be used as an excuse for the dirge that followed.

The Slovak fans were a passionate lot for the first 20 minutes until 18,110 people in the ground fell asleep through sheer boredom. The one person who managed to keep up a level of excitement throughout the 90 minutes was a rather rotund chap in a blue t-shirt who had an irrational hatred of Theo Walcott. Every time Walcott would warm up in front of him, this man would bellow “THEO WALCOTT HOMOSEXUAL”. This was clearly factually incorrect as Walcott has been with the lovely Melanie for as long as he has been famous. It was also extremely bizarre as, if as suspected this was just abuse of a player, there are surely more high profile members of the England squad to target such as Wayne Rooney and Joe Hart? Anyway, the homophobic abuse couldn’t last and he was eventually tackled to the ground by no less than five stewards and bundled out with beer flying everywhere.

That forced removal was the highlight of the game as the Big Sam era continued where the Woy Hodgson one had left off in being uninspiringly dull to the point where it really didn’t matter that I was in the home end. Martin Skrtel finally seeing red for trying to steal the leg of Harry Kane after he’d earlier failed in an attempt to behead him raised a little interest, but even with a man advantage England looked on course for a repeat of the 0-0 draw in the Euros. That was until the last minute when Lallana struck, after which a loud cheer escaped me. This was followed by a hasty retreat out of the Slovak end and back to a pub on the square to await the rest of the traveling party with a beer – Rebel, which I’m sure you can already guess was Czech. On arrival back in Bratislava we finally found something homemade thanks to Fabrika, a lovely bar which brewed its own beer on site.

Monday morning arrived with a sense of nervousness as the boat trip to Vienna loomed. To settle the nerves, it was a pint for breakfast (another Bernard, Czech). The trip itself was an absolute delight, passing past old towns, forests and finally into historic Vienna where we were able to eat a schnitzel which contained at least six whole pigs, have a few more pints and then fly home.

Most importantly, we finally had the answer to that great philosophical question – it turns out that if a man who suffers from notorious seasickness visits 27 pubs over 72 hours in two Eastern European countries and then takes a boat up the Danube, he can be absolutely fine. Good news for that 30th birthday plan. 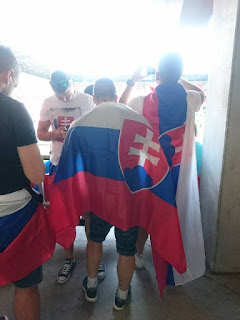 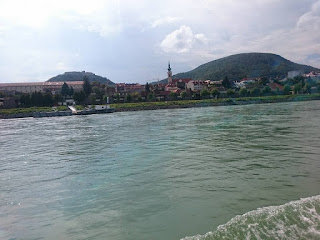 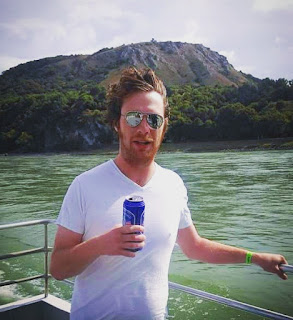 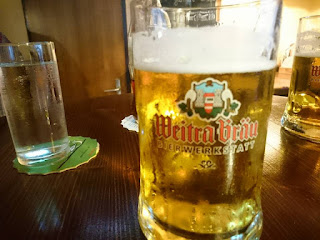 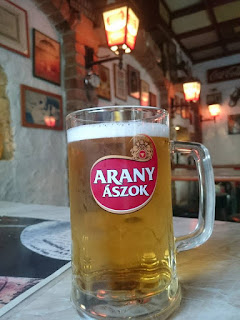 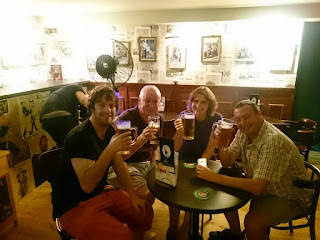