"It's the Amex on steroids"

When UEFA first announced the creation of the Nations League, many football fans were quick to pour scorn on the idea.

An international competition with promotion and relegation? Playing the same two opponents home and away in quick succession in the group stage? All for a trophy that looked like a giant Mr Whippy ice cream carved out of silver.

It all seemed so pointless. A needless addition forced into the international calendar in place of international friendlies. It wouldn’t be any better than the repetitive cycle of meaningless games with France, Germany, Spain and the Netherlands that England went through every few years.

Well, how wrong can you be? As the inaugural Nations League came to a close in the stunning setting of Estádio do Dragão, even the most ardent sceptic towards the format had to admit that it’s been a roaring success.

The third-place playoff and the final were held on the same day, one in Guimarães and the other in Porto, two fantastic cities just over an hour away from each other in northern Portugal. With there being a near-four-hour gap between the first game finishing and the second game kicking off, that presented the tantalising prospect of doing both games. Challenge accepted.

TAP Air Portugal did their best to scupper those plans though. We had been due to fly from Gatwick to Porto on the Friday but due to radar problems, the flight was cancelled. No problem according to our friendly Portuguese carrier – they could still get us to Porto.

We’d just be flying a day later. Oh, and it would now be from Heathrow. And we would first have to go to Lisbon. Where we’d have to wait seven hours for another flight to Porto. Which would arrive at 11pm on Saturday night. Just the whole 24 hours later than originally planned.

That seemed like a worse deal than a no deal Brexit – and speaking of Brexit, now seems like a good time to thank Theresa May for delaying it happening for long enough so that we can attempt to claim compensation from TAP Air thanks to EU rule 261/2004. Losing that right wasn’t written on the side of a bus.

Unfortunately, there was no other choice and so it was off to Heathrow for a night in a Premier Inn before that flight to Lisbon. Rather than hang around in Lisbon Airport for seven hours, we decided to make our own way to Porto via a three-hour train journey. This was turning into a lot of effort for a third placed playoff with Switzerland.

Porto it turned out was worth the wait. It’s a beautiful city full of stunning architecture and the first bar we stumbled across while exploring had views as good as any I’ve ever visited. It was called Guindalense and was perched precariously above the Douro river, right next to the Luís I Bridge. With the sun setting, the lights of the city starting to shine and a good bottle of red wine costing €4, it was the perfect place to relax after such an eventful journey.

The city itself is famous for its wine and we certainly got through a lot of it - along with the mythical Super Bock which must be one of the best beers in the world. Porto is also famous for the Francesinha, which is pretty much a heart attack waiting to happen in meal form. This local delicacy is a sandwich which contains ham, sausage and steak or beef. It’s topped off with a fried egg and melted cheese and then covered in a thick tomato and beer sauce. Great for the appetite, not so great for the life expectancy. Porto being a city of hills meant it was relatively easy to walk off however, or so I keep telling myself.

That was Saturday night and on Sunday it was game day. Special trains had been laid on from the historic São Bento railway station to Guimarães, a city of 158,000 people an hour and 10 minutes to the north where the Portuguese nation was born in 1128.

If you’ve read some of the more excitable members of the British press, then no doubt you’ll be expecting tales of a warzone. Thousands of English hooligans rampaging through the cobbled streets. The smell of tear gas and pepper spray lingering in the city’s UNESCO World Heritage Site town centre. Locals scared for their lives, hiding indoors until the massed yobs had finished desecrating their homes.

The Daily Telegraph’s Paul Hayward was certainly peddling that myth on Twitter. He described the experience of having England fans playing in their town as “scary” and “vile” for the people who live there.

One of his more dramatic tweets read: “I wouldn't be sorry to see England forfeit and go home, out of consideration for the people of Porto and Guimarães. Failing that, they should stop playing away games until the safety of local people can be guaranteed.”

That couldn’t have been further from our experiences of Portugal. Perhaps Paul should have visited the town square in Guimarães before the Switzerland game. He could have seen the locals who were merrily chatting to and taking photos with the supporters they were apparently running scared of.

He could have met the owner a of Pintado Fresco, a great little bar just off the main square which we chose for pre-game refreshment. Rather than worrying about his safety not being guaranteed, he was drinking with England fans and telling everyone that he was delighted that Gareth Southgate’s side had lost their Thursday night semi-final to the Netherlands. He actually wanted these vile people back in his town and back in his bar drinking €5 pints of Super Bock and €2 glasses of local sparkling white wine because they were such good fun.

That alcohol was much needed as the football wasn’t up to much. Guimarães’ Estádio D. Afonso Henriques was around a 10-minute walk from the city and was neat and tidy, a two tiered affair all the way around. It was a particular delight for us fans of floodlight pylons, with two large columns at the opposite end to the main England section having been built actually in front of the upper tier.

The game was played in front of a sparse crowd and you could tell that England’s players in particular were coming off the back of a long season. Neither side really created an opportunity in the first half aside from Harry Kane rattling the woodwork with a fine piece of improvisation.

It had the feel of a pre-season friendly about it, which pretty much confirmed our decision to bail and head back to Porto for the final – tickets for which were still available and only a few clicks away thanks to UEFA issuing them electronically via a special app.

Having heard about the public transport nightmare that unfolded after the England - Netherlands game 72 hours previously - which had seen some fans stuck in Guimarães for up to five hours after the final whistle due to a lack of available trains - we left the England game after an hour in order to get back to Porto.

It turned out this wasn’t actually a sacrifice that needed to be made. Some supporters reported staying right the way up to final act of the penalty shootout - Jordan Pickford scoring and then saving to give England victory - and still managed to make the final as on this occasion the trains ran like clockwork.

Given the travel disasters we’d already experienced, that wasn’t a risk we wanted to take. Having also missed the spot kick success over Colombia at last summer’s World Cup in Russia, seeing England win on penalties will have to wait for another day.

Estádio do Dragão couldn’t have been more different to Estádio D. Afonso Henriques if it tried. While the ground in Guimarães was a quaint little affair with a homely feel, the home of Porto was a bold and brash stadium which must be one of the most striking in the world.

As a Brighton and Hove Albion supporter, the best way to describe it is as the Amex on steroids. It has the same sweeping arches holding up the roof, but it’s twice the size of its cousin some 1,300 miles away in Sussex.

That roof floats over the vast stands behind each goal which have open backs, providing glorious views over Porto itself. If you are in the right seat in the stadium, you can watch the sun go down in the gap between terrace and roof. It’s a real marvel.

One of the other criticisms thrown at the Nations League when it was launched was would anybody care about it? Judging by the atmosphere inside Estádio do Dragão, the locals certainly did. Half of the stadium was a sea of red and green. Portugal are going through a golden period at the moment led by the irresistible Cristiano Ronaldo and their 1-0 win means they are now both European Champions and Nations League champions.

For once, it wasn’t Ronaldo who delivered their success on this night but Goncalo Guedes. It was much more entertaining than the earlier game – not that that is saying much – with both sides having chances throughout and the 43,199 in attendance seemed to enjoy themselves.

A large proportion of that crowd was made up of England fans who’d brought tickets hoping that it would be the Three Lions in the final. Even though it wasn’t, many turned up anyway. That led to the strange situation whereby an international final between Portugal and the Netherlands was played out to impromptu songs about Harry Maguire drinking vodka and jaeger and a backdrop of flags of St George.

Most of the English in attendance seemed to be siding with the Dutch but I was firmly in the neutral camp, just wanting a good game of football. In the end, that’s what we got. The streets of Porto were bedlam afterwards. Flags out of sunroofs, beeping horns, people singing and dancing. Further proof if it were needed that this new fangled Nations League does matter.

Sadly, we weren’t able to join the party. A 7am departure the following morning to Madrid meant an early night and an attempt to get a significant red wine stain off the wall. That’s one of the dangers that comes when the vino is so good that you leave a glass on your bedside table to drink during the night, only to end up spilling it everywhere in your sleep.

UEFA have already confirmed that the Nations League will return for the 2020-21 season. With Bosnia and Ukraine promoted into England’s League A, the prospect of trips to Sarajevo and Kiev is a very real possibility. It can’t come soon enough. What a tournament. 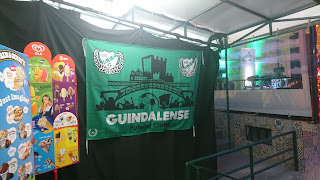 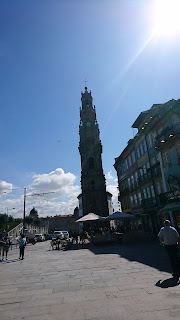 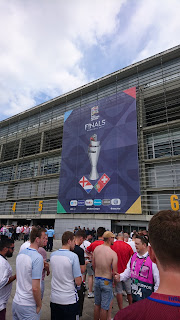 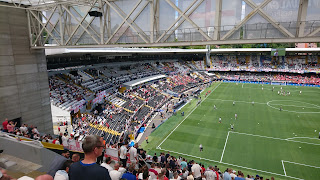 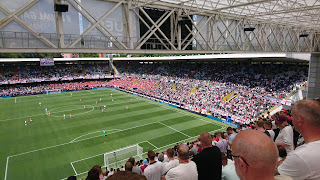 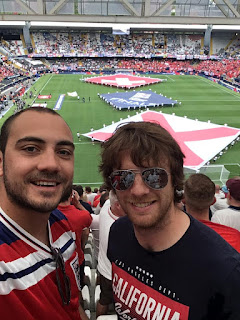 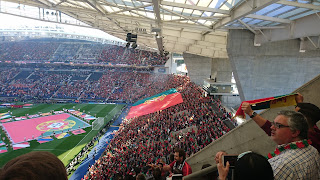 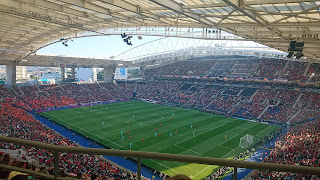 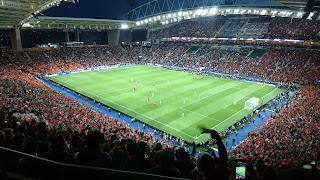 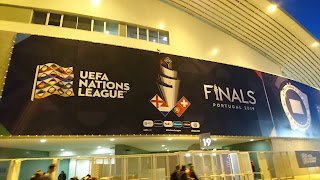