San Marino. Is there a more pointless international team on the planet? They have one win to their name - a 1-0 friendly victory over Lichtenstein in a friendly in 2004 - and have spent pretty much their whole existence propping up the FIFA World Rankings. The place itself has a population of 32,576, meaning that you could fit the entire principalities residents into Wembley nearly three times over. And from that, you need to find at least 11 people who are vageuly talented at playing football. Poor sods.

All of that may make you wonder, what is the point in going to San Marino to watch a game? Surely you could find an equivalent standard at say, Sussex Sunday League level and not have to pay for flights or a match ticket. Just be wary of the dog excrement around the side of the pitch and the vomit left by the hungover left back.

But that defies the point. Italy is a fantastic country. Anywhere that brings you out a plate of sandwiches as a complimentary accompaniment to a pint is going to be. And San Marino itself is also beautiful if slightly boring. No readers, this is a trip well worth making.

We started in Pisa which has so much more to offer than just a poorly constructed tower. Really, you have to admire the carefree attitude that epitomises Italian life. If The Shard had have been built and then started leaning at an alarming angle, there would be enquiries, lawsuits and it would probably be torn down and rebuilt. But the Italians? "Ah well, the Tower of Pisa leans a bit, not a lot we can do now, hey maybe we can even turn it into a tourist attraction." One that shouldn't be climbed if you've had a couple of pints, it must be said.

So what else was there? Well, pizza to start with. The sort of pizza that was so good it turned me into one of those people who photograph their food. And then there was beer and plenty of it. Small squares off the main road - seemingly, the cities only main road - where you could sit outside drinking Birra Moretti and Peroni in 660ml bottles for just €3 until 4am in the morning when it was still a barmy temperature.

We also stumbled across a bar selling flavoured vodka for €1 a shot but the less said about that, the better. Especially for Mark and Steve for whom the experience proved to be just a little too much as they both dozed off mid drink and were unable to locate their hotel without the help of an unusually tuned in McCarthy. Who, needless to say, couldn't find his hotel afterwards.

From Pisa, it was off to Florence. There wasn't much to report about this great city other than the fact that yours truly can now add it to the list of places he has slept rough in after a hostel mix up saw me miss check in. This started out by spending as long as possible in a pub that fantastically saw a performance of Taylor Swift at some weird Open Mic night type event before joining some migrants in a park, sharing around some more Moretti and then visiting the cities cathedral - the biggest bricked dome building in the world no less.


Afterwards, the station for departure at 8am the next morning was found and sleep was taken - heartily interrupted every 30 minutes by Steve who in an attempt to find the right station for his train seemed to be on a mission to visit every single town and village within a 15 mile radius of Florence by boarding the wrong locomotive. He did finally make it to Rimini before the rest of the happy campers, where we met him and from where it was off to San Marino.


The Stadio Olimpico is not actually in San Marino itself but at the bottom of the mountain on which the principality is situated so if you go straight to the ground, you can't actually say you've visited the place. For reasons of sheer goonery in the quest to tick off as many different countries as possible, that meant a bus to the top of the hill and a visit to the City of San Marino.

A medieval place with old walls and plenty of stairs, it offers breathtaking views across Italy from the top of Mount Titan. There is not a lot else going on there bar food and drink unless you fancy picking up some weaponery with a plethora of shops having guns, knifes and for those of us who'd like to impress Jennifer Lawrence with our Hunger Games skills, crossbows available for sale over the counter. Unfortunately, EasyJet's overly strict policy on dangerous items meant that no purchase was practical.


So I suppose we should mention the football. Think pre-season friendly away against a European lower league team and you've got it just about right. The Stadio Olimpico hosts 7,000 odd fans in two stands down either side separated from the pitch by a running track that, despite the grounds name, is yet to hold to the Olympics. There were 3,000 odd England fans in the crowd of 4,378 and for those who didn't have a ticket, you could pick up a cracking vantage point from the top of one of the hills behind the goal.


The game itself was played on a surface comparable to my Grandfathers vegetable patch and that is probably doing a huge disservice to where he produces some award winning stuff. The atmosphere was totally flat bar anytime San Marino got into England's half when the entire crowd would cheer them on. They even nearly had a shot at one point which sparked wild celebrations scenes of jubilation.

As you might expect, England ran out comfortable 6-0 winners through goals from Wayne Rooney, Ross Barkley, Harry Kane, a Theo Walcott brace and an own goal from Cristian Brolli. Brolli himself did actually manage to justify the entrance fee alone with an absolutely stunning display of ineptitude, scoring not only that own goal but having to play most of the first half with a bandage around his head which constantly came off on the several times when he fell managed to fall over thin air. He was definitely the pissed up left back of the pub team.


That Rooney goal saw him tie level with Bobby Charlton in the England goalscoring list and he was withdrawn early in the second half. Of course the official reason would have been the game was run and he had no need to stay on but the cynic inside can't help but wonder if the FA saw the opportunity to sell a load more seats for Tuesday night's game against Switzerland by having him attempt to break the record then rather than in front of a sparse crowd that was doing it's hardest not to fall asleep.


Job done for Roy Hodgson and his side then and after a 30 minute journey back to Rimini it was beers and food all round before an early night (yes, really) ahead of the journey to Rome on the Sunday. Rome itself was fantastic with all the usual sights hurriedly ticked off but in truth you need more than the day there that I'd afforded myself.

A return visit to Italy for a Roma or Lazio game then? Ah, that would be a shame. 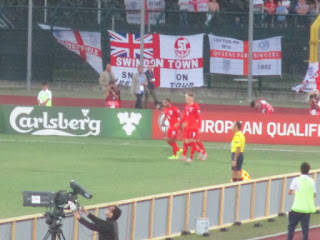 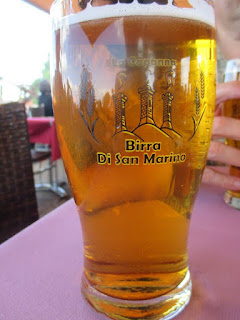 Posted by S.McCarthy at 17:00 No comments: Links to this post