If it wasn't for the photographic evidence, you could easily file the surreal evening that was Rot-Weiss Essen v SC Verl as some sort of cheese induced dream.

How else could you explain being given a pitch side photography pass as your matchday ticket, attending the post game press conference and interviewing the visiting manager who turned out to be a German version of Neil Warnock, drinking with a man in a bar who carries around a toy dog in a Liverpool hat, losing a signed Rot-Weiss babygrow as well as the hotel room key leaving you to sleep in a doorway until it was retrieved 45 minutes later?

Yes, Essen certainly had it all. The man to thank for setting the ball in motion was Willy, the wonderful Essen press officer who lived up to his name sake Wonka by giving us the equivalent of a footballing golden ticket. Or to be more precise, complementary seats in the press box and pitch side access. This fine looking young Russian man even gave us a tour of the ground and hospitality areas before the game.

Of course, the trouble with being gifted a photographers pass meant actually taking some photos. Leading to the ridiculous sight of Scott McCarthy, complete with Cannon Digital Camera retail price around £79 but now worth significantly less after a year of drunken use, joining a gabble of professionals as the teams entered the arena. Realising very quickly it was unlikely I was ever going to make it look like I had any idea what I was doing, the focus quickly switched to taking photos of the Rot-Weiss cheerleaders.

Having seats in the press box caused another dilemma. Half the fun of going to German football is to drink while the game is on. But how would this go down with our fellow journalists if we sat down and put two pints each on our workstations? Can you imagine Oliver Kay of The Times or Shaun Custis of The Sun plonking themselves down in the press box at Old Trafford with a couple of beers for the first half? Thankfully, we had our answer very quickly as another writer took his seat with a pint.

The game itself was a Regionalliga West encounter, which being the fourth tier made it the equivalent of England's League Two. The standard however was far worse and the only entertainment in the first half came from the ridiculous Verl manager, Andreas Golombek. Comparisons to Warnock were well founded as he spent most of the game going mental, turning around and gesturing at the home fans and at one point making a glasses sign at them. His hair was a thing of beauty as well, blonde and well groomed which when you look at how quickly managers in England tend to grey or even worse go bald suggests the pressure isn't quite the same in the mid table of Germany's fourth division.

Rot-Weiss did manage two goals in the second half, coming from Holger Lemke and Marcel Platzek with the visitors Sam Salehi completing an interesting evenings work after being sent off for a ridiculous challenge with the last kick of the game a mere five minutes after coming off the bench. Of more concern to the home fans was the following Tuesday nights game against MSV Duisburg, their fierce rivals from only a few miles up the road. If any indication of the importance of that one was needed, then the banner displayed on the home terrace after the game was it.

That home terrace itself was a decent sized structure and the centrepiece of where their fans were based in the relatively new Stadion Essen. A large seated stand was opposite the main stand where we were with ours featuring executive boxes at the back. The other goal had a stand split in half between seating and a terrace and was given to the visiting Verl fans - all 50 of them. Bless. The home side more than made up for that with a decent atmosphere. One nice touch was a floodlight from their former ground having been moved to the new one and plonked in the middle of the car park. Think the Stadium of Light with a Roker Park floodlight outside. Connecting the past and the present as Willy so elegantly put it.

Needing more beer after the game, we found our way into the post match press conference which is where the real surreality of things began to kick off. We carried out an interview with Herr Golombek via Willy - now in a role as translator - in which he seemed genuinely baffled as to why we were there. Beer and football didn't seem to be a justifiable answer to the Germanic Warnock.

Having dicked about at the ground for so long afterwards, the only option back into town was taxi after which we visited a bar that brewed its own beer and had a tree growing through the middle of it and then committed the ultimate sin - going to an Irish Bar. This one as it happened was not too bad and we spent most of the night in Fitzpatrick's talking to a Rot-Weiss fan by the name of Jan who was a local police officer and carried around a toy dog in a Liverpool hat with him. He seemed like a nice enough chap until we discovered that Andy had lost a signed Essen babygrow - the sort of gift that his recently born son Bobby would have no doubt cherished down the line/resulted in him being taken away for having an unstable father - with Jan bearing the brunt of the accusations despite his work as a law enforcement officer.

Not even writing on his Facebook wall the extremely impressively translated line of "Wo ist meine babygrow" could find the stolen garment. And that wasn't the only thing that Andy misplaced on this evening, with the room key going missing as well leaving us to sleep in the hotel doorway.

Thankfully, unlike the babygrow that key was traced back to Fitzpatricks and after two taxi journeys at 3am in the morning to retrieve it, we woke up in bed to wonder just how much cheese you'd have to consume to dream the previous 24 hours activities. Essen - you simply couldn't make it up. 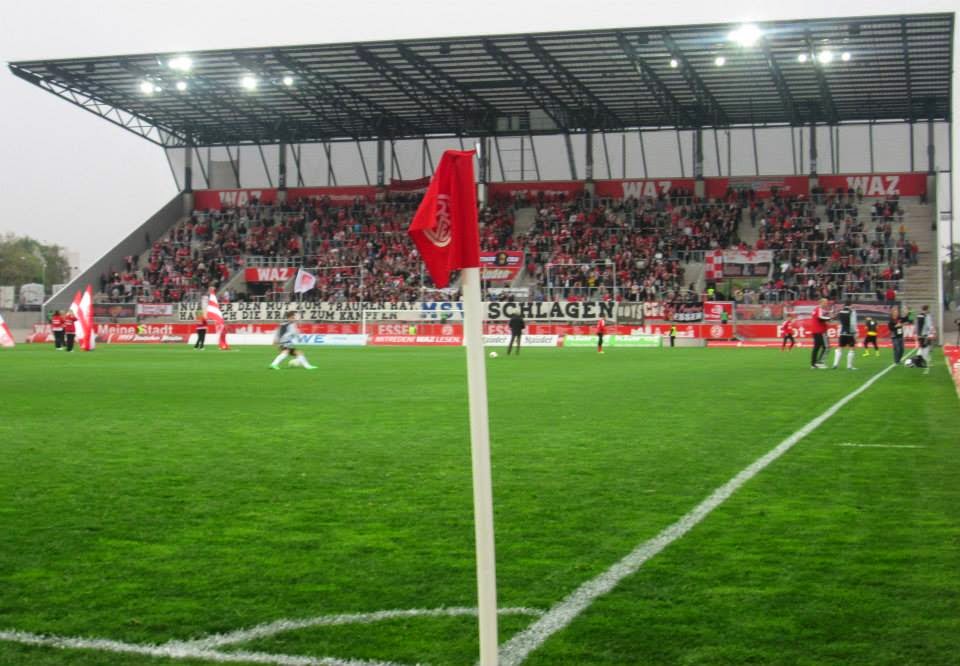 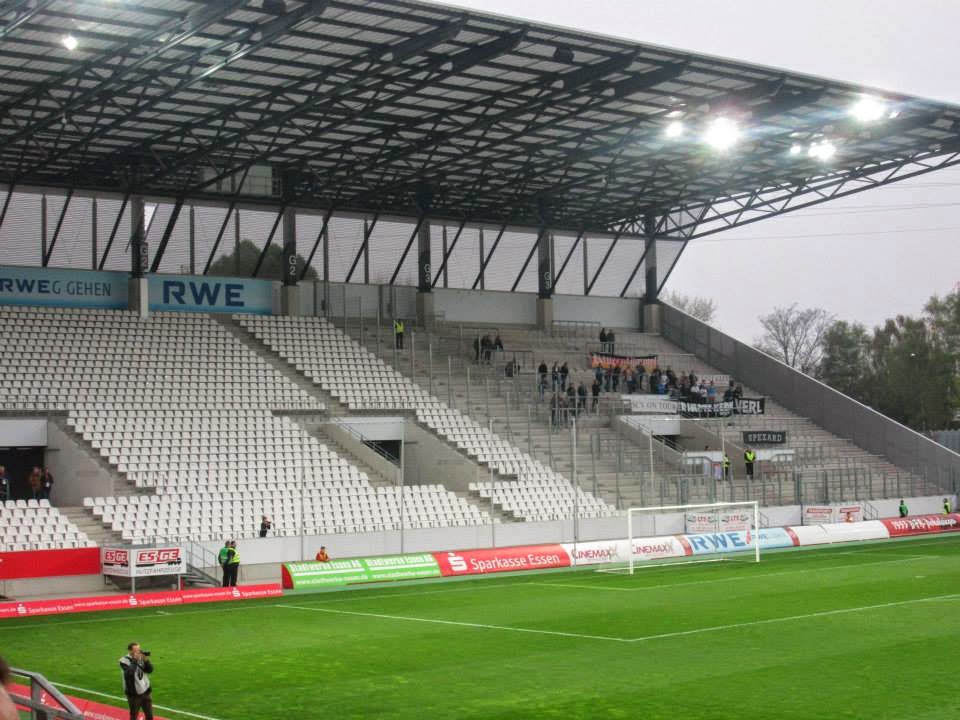 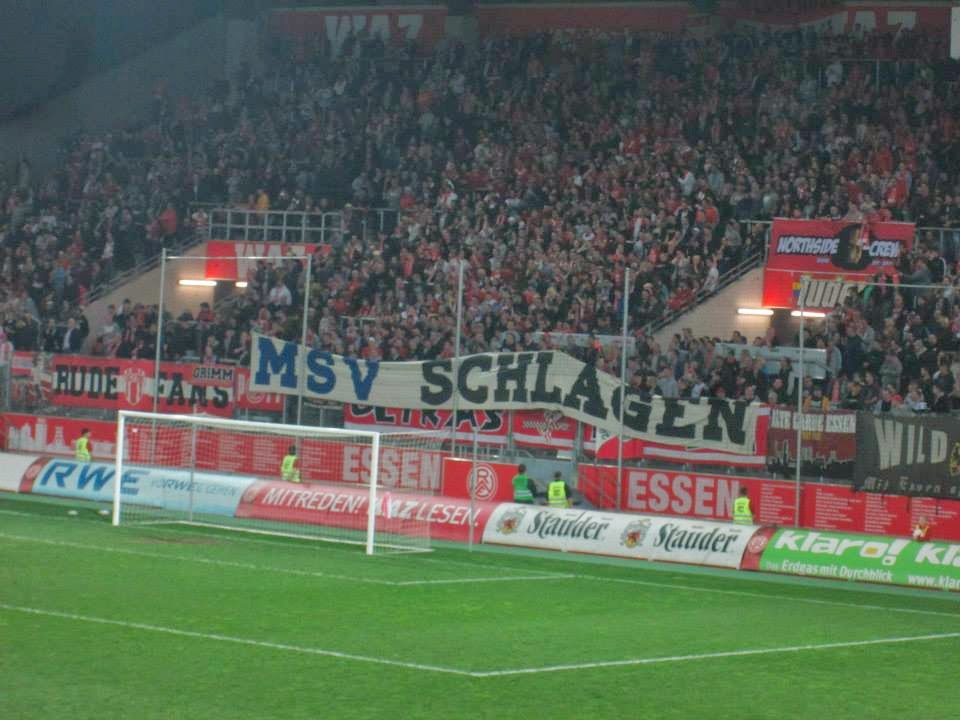