"You know Nigel Farage, the Brexit bloke? Yeah, you look like him"

The Bundesliga has been in fashion among English football supporters for over half a decade now. Cheap prices, terraces, great atmospheres and beer while watching a game have made Germany the number one destination for football tourists.
That popularity has apparently failed to reached Ingolstadt however. There was an incredibly bemused reaction to the appearance of eight English blokes on the south terrace for Die Schanzer's huge relegation clash with Darmstadt. This was perhaps best summed up by one blokes question of "Why the **** have you come to watch Ingolstadt? We never get English people here."

It turned out that this bloke, as well as sharing an uncanny resemblance to Nigel Farage, was actually an Ingolstadt director. As far as opening remarks in a conversation with a board member of a football club you are visiting go, "You know Nigel Farage, the Brexit bloke? Yeah, you look like him" is perhaps not the best greeting you can make. Still, the Ingolstadt fans took it all in their stride. For them at least, Brexit doesn't seem to mean Brexit. Unlucky Theresa.
But back to the main question here: Why the **** had we gone to watch Ingolstadt? We were actually on a stag do in Munich but rather than do a normal stag do activity like paintballing, go karting or something that involves exercise and grossly unhealthy stuff like that, we decided to take in a football game. A wise choice, I'm sure you will agree.

Watching either 1860 or Bayern Munich play would've been the sensible choice. But 1860 were away and Bayern were hosting Borussia Dortmund so tickets were scarcer than a vegetarian Bavarian. This was great news for me, having been to the Allianz twice already to see both Munich teams, as it meant the new ground klaxon could sound.
And that new ground ended up being Audi Sportpark. Ingolstadt is about 45 minutes north of Munich by train and so with the obligatory train beers purchased - not that they were really needed after two solid days of drinking in Munich beforehand, which included a fantastic session in the Englischer Garten with Bayern and Dortmund fans the previous afternoon - we were on our way.

Given the lure of Munich's beer and a fantastic train timetable cock up, we only arrived in Ingolstadt 30 minutes before kick off. Thankfully, the club seemingly had the foresight to employ Sebastian Vettell as one of their shuttle bus drivers and against all the odds we made it to the out of town stadium just in time for kick off.
Audi Sportpark was built in 2010 and is your standard new German stadium; single tiered in a rectangular shape, compact and with a great atmosphere. The current version of Ingolstadt were only formed in 2004 - since then they've been on a meteoric rise through the divisions which culminated with promotion to the top flight for the first time in 2015. Seeing that when the ground opened in 2010 when they were still in the third tier, it's on the smaller side for a Bundesliga ground holding just over 15,000. Being miles out of town, there is little around but the club are clearly trying to improve that with a traditional Bavarian wooden shed having been erected outside as a pub.

Inside and we were with the hardcore support on the terrace. It was an interesting mixture of people and not solely the flag waving ultras you tend to find dominating that sort of section of the ground at other German clubs. In amongst those types were kids scaling the fences at the front, old blokes puffing on cigars and yes, members of the board who look like Mr Farrage. No need to worry about the trouble that can come from taking photos or being football tourists as has become the case at some venues across Germany in recent times, everyone was welcome at Ingolstadt.


There were other elements missing that you usually associate with German football. No man with a 1980's building site bullhorn stood at the front leading the singing for example. No, Ingolstadt lead the way in the use of modern technology, giving their top boy a microphone and a set of speakers strung along the front of the terrace. Welcome to the 21st century.

Some might expect this eclectic take on fan culture to dilute the atmosphere but Audi Sportspark was rocking despite the emoty soaces. This was probably helped by the importance of the game, with both sides in very real danger of relegation to Bundesliga 2 next season. The proverbial six pointer as the season draws to a close this most definitely was.

If we were watching a side that, come the end of the season deserves to get relegated then the same should definitely be said of the referee, a Herr Manuel Grafe. He would've been better of being named Manuel Gaff given the number of mistakes that happened over the 90 minutes. Had this been in England, the famous chant about the man in black being a word that rhymes with banker would've been ringing out from all four corners of the stadium given how attrocious he was for both sides.
Thankfully, Herr Gaffe didn't affect the quality of entertainment factor of the game which ranks as arguably the best I've seen in Germany since my last match involving Darmstadt. On that day four and a bit years ago they drew 1-1 with Alemannia Aachen in the Bundesliga 3. On this day, they were on the wrong end of a 3-2 defeat that pushes them closer to the trap door back to whence they came. Make no mistake however, it has been quite the fairytale rise for both these clubs to the top flight of German football.

The game went off at breakneck speed, Ingolstadt going 1-0 up through Pascal Gross. That didn't last very long and soon it was 1-1, Darmstadt equalising via Mario Vrancic. Herr Gaffe then decided he wanted to become centre stage, awarding Darmstadt one of the worst penalty decisions I've ever seen which Vrancic converted for 2-1. Almog Cohen made it 2-2 just past the hour mark and then Markus Suttner netted what turned out to be the winner with a quite beautiful free kick. Not content with that penalty decision, Herr Gaffe decided to flash two red cards with a matter of minutes remaninging to Darmstadt's Antonio Colak and the hosts Romain Bregerie. Blimey. That made it three wins in a row for Ingolstadt for the first ever time in the Bundesliga and took them to within a point of safety. For Darmstadt and their manager Torsten Frings - the former German international of fantastic mullet fame - it looks as though Bundesliga 2 beckons for next season.

What with this being a Sunday, we were on a tight schedule to get back to Munich afterwards and so had to foresake any sort of exploration of Ingolstadt itself. This was a shame as not only does the Danube pass through it, but according to Wikipedia it is the place where Victor Frankenstein creates his monster. Rather less excitingly, it is also home to Audi which explains the sponsorship deal behind the stadium. There was just time for a look around the club shop - given the apparent lack of foreign visitors, were we the first ever English supporters to buy Ingolstadt scarves - and to grab a selfie with the mascot Shanzi. We had no idea what Shanzi was meant to be so any answers on a postcard please.

Once back in Munich, we toasted our new found friends at Ingolstadt's hopeful escape from relegation by turning a Chinese restaurant into a karaoke bar until 3am. If English supporters rocking up at Audi Sportpark seemed bizarre to Mr Farage, Lord knows what he'd have made of them then singing Taylor Swift songs in-between plates of lemon duck. ` 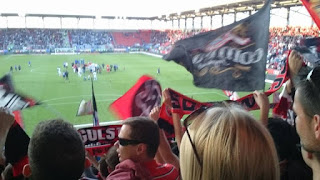 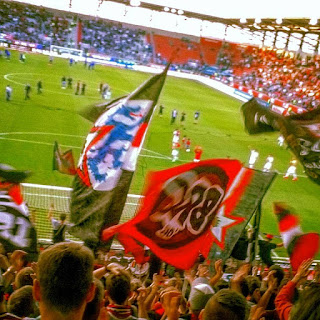 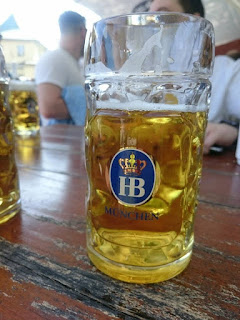 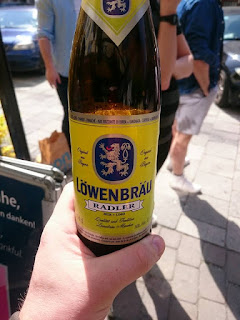