Having spent the previous evening sleeping in a doorway after losing a hotel key, it takes something special to convince you to do anything but lie in bed for the entire day. And it has to be something really special to convince you to drag yourself onto public transport, be sick on a tram full of people (Andy) and make an hour journey across Germany while attempting to get back in the beer game. That something really special? Westfalenstadion, Dortmund.

The first rule of three day football trips is don't go all out on the first night. Something that was hopelessly ignored at Rot-Weiss Essen v SC Verl and the resulting night of partying with the Essen support. It left two slightly (or in Andy's case, very) broken Englishmen to head to Dortmund to see Borussia take on VfL Wolfsburg.

On another day, to another ground, for two other teams we might have considered sacking this off. But Signal Iduna Park to give it it's official title is like very few others in Europe and this was our team, Wolfsburg, taking on one of the biggest in Germany.

The best way to battle through feelings of suicide brought about by consuming far too much beer is the simple hair of the dog technique. That meant consuming a can as soon as was humanly possible, in this case at 11am on the train from Essen to Dortmund. For Andy, this took slightly longer until we found a bar called Pfefferkorn with him deciding to use the train journey to take a little nap in the middle of the floor.

It was far too hot in Pfefferkorn for two hungover men despite the fact they were serving the excellent Brinkhoffs so we did what all good Dortmunder's do and began outside street drinking thanks to a little kiosk selling home brewed bottles of Bergmann Bier at an absolute steal of 2. This represented the only place in the city you can buy that particular beer and as such proved very popular with the locals.

Of course, this also meant explaining the story about how two Englishmen have ended up becoming VfL Wolfsburg supporters, a very long and sad tale involving the words "Steve", "McClaren", "FC Twente", "Wolfsburg", "umbrella" and of course "I short of knew" said in a ridiculous Dutch accent.


Signal Iduna Park is well served by public transport and it was a quick train hop to the stadium where tickets were collected and beers and sausage from the many street vendors around the ground were bought and consumed outside of the stadium while mingling with others heading to the game. And what a big game it was, with Wolfsburg chasing a Champions League spot and Dortmund trying to cling onto second with the title already heading to the Allianz.


The stadium itself is fantastic. You get some grounds which you enter for the first time and they take your breath away. It's unusual to find anywhere that does it for a second time, the novelty normally having worn off but Signal Iduna Park managed it. We were in the complete opposition corner from our last visit, this time tucked high away opposite the Yellow Wall up with the Gods looking down at this tiny patch of green surrounded by towering blocks of yellow, black and noise.


The scale of the place is massive and what makes it appear even bigger is that every stand is different, meaning none of it appears as though it is meant to fit together. The steepness and vastness just adds to the atmosphere and when You'll Never Walk Alone gets going before kick off it is a spine tingling moment as scarves, flags and banners are hoisted into the air before the teams enter the arena.

To our surprise, there were Wolfsburg fans everywhere none of whom were being very subtle about their allegiances. I had had the good grace to hide my green scarf and that lasted until 34 minutes when a combination of beer and Ivica Olic giving the visitors the lead brought it into play, swiftly followed by a high five from the chap next to me who also turned out to be a Die Wolfe fan.


Dortmund aren't one of the finest teams in Europe for no reason though and two second half goals from Robert Lewadowski and Marco Reus ensured it was they who took the three points. We watched the stadium empty afterwards, eventually being the last two in the top tier which led to arguably one of the best games of hide and seek you are ever likely to encounter with my good self hiding high at the top of the stand, only to be caught by one alert female steward, quashing any hopes of managing to remain unfound until the midweek Champions League semi final with Real Madrid.

After the traditional post game dicking around inside the stadium that seems to take place every time we visit Dortmund, it was time to catch the train and head straight back to Essen. This was sensible given the early start to head to Holland the following day, or at least it would have been had we not been lured into a bar outside the hotel on our return.

What made two strong minded individuals deviate from their planned course of a relatively early night? Beer and Jagermesiter obviously, but also the prospect of the self-DJing venue whereby patrons were allowed to pick their own music from the laptop.

It was only when we were asked to leave that we realised that German's perhaps don't share our love of Phil Collins and Easy Lover. Certainly not enough to hear it a dozen times, anyway. 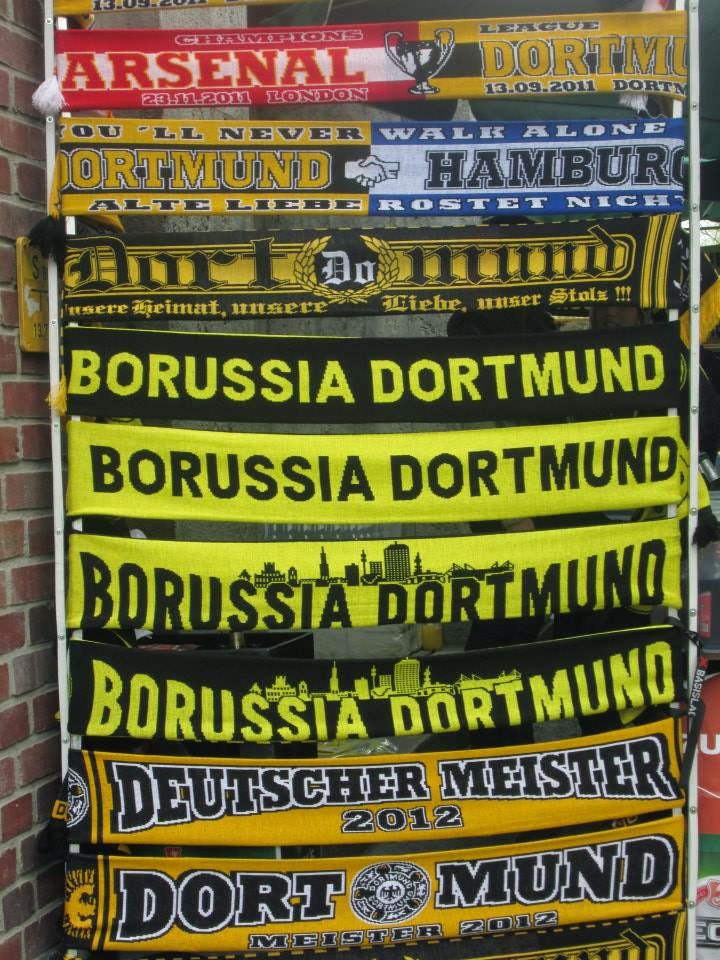 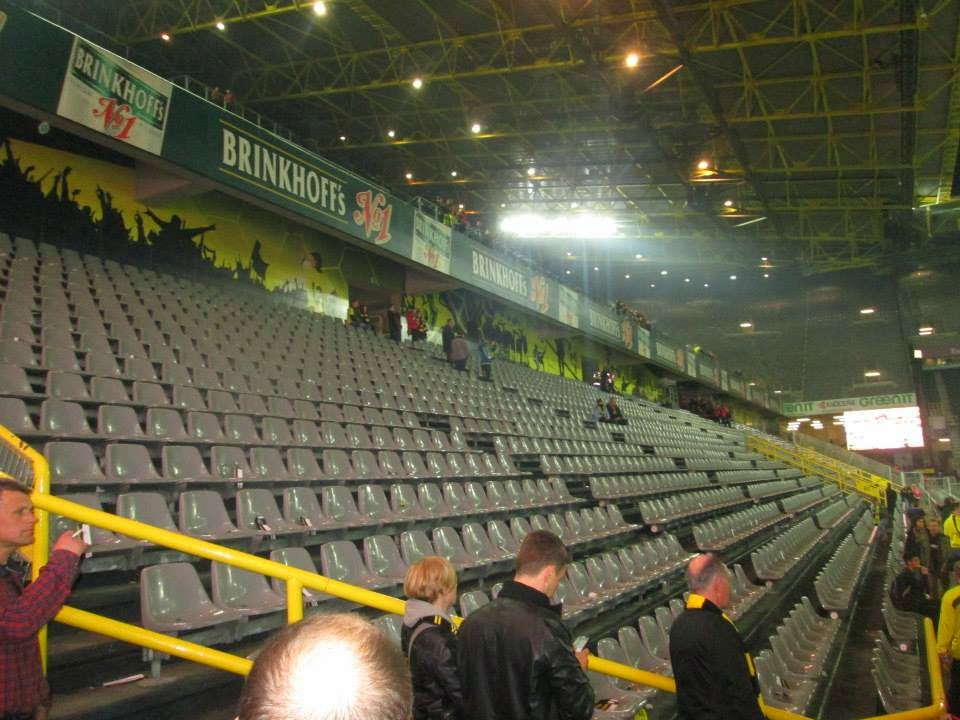 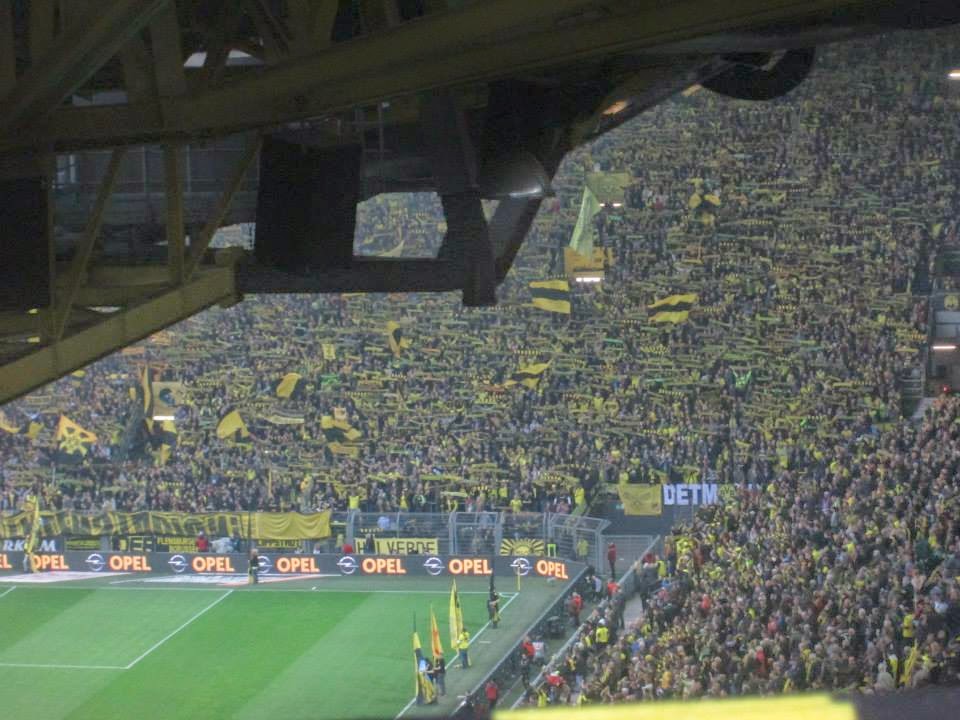