"147 different beers. Complimentary bowl of gouda with each round. Eight hours until kick off. I can't see what can possibly go wrong."

Researching the fine medieval city of Bruges threw up many fantastic quotes. "Venice of the North", "Romantic Hotspot" and "Chocolate Lovers Capital" were three such straplines which may appeal to your traditional holiday goer but to be brutally honest did nothing for me.

The one that did catch the eye was "Bruges is a city that takes beer very seriously". How seriously I wondered? Well, put it this way - it doesn't get much more serious than pubs dispensing with a food menu in favour of a beer one. Now that is my sort of seriousness.

A trip to Belgium or the Netherlands had long been the plan for the opening gambit of 2015's adventures across Europe, and so it was that Bruges reputation for beer gave it the nod with one of the cities two Jupiler Pro League sides, Club Brugge, having been obliging enough to progress to the knockout phase of the Europa League, meaning some Thursday night action against Danish side Aalborg.

But before the football, we had that beer to get through. An hours train journey from Brussels deposited the happy party in this most beautiful of cities; all cobbled streets, ancient walls, twisting canals and chocolate coloured buildings. Very romantic.

And then we stumbled across La Garre. Hidden down a Harry Potter-style alleyway that you could quite easily blink and miss, this is the sort of place that every connoisseur of strong, continental lager loves to discover. 147 beers, none weighing in at under 6% and a complimentary bowl of gouda with each round ordered. All consumed while listening to some of the greats of European classical music. What was this, McCarthy's Football Travels does culture?!

That certainly couldn't last, not when a certain level of debauchery has almost become a requirement on football trips away. As marvelous as this little hideaway of a pub was - and trust me, it was pretty marvelous - we had plenty more pubs to see and plenty more beers to drink. From there we explored the winding streets taking in the sights (Belfry, Statue of Jan Breydel and Pieter de Coninck, Provincial Court), eating the food (cheese, waffles, cheese) and surveying the pubs (Klein Venetie, Hollandse Vismyn, Tongerlo) before finding ourselves joining the traveling Aalborg army.

They were gathered in the least Brugesy pub you could find which went by the original name of La Pub. Incredibly, we managed to stumble across a set of fans who had recently become besotted by darts ever since seeing Jan Molby defeating Eric Bristow in a charity game the week previously.

Acquaintances made, e-mail addresses swapped so that our new found friends could come over and watch some action at the Aly Pally in December and several more beers sunk and we found ourselves taking up their invitation to join the supporters on their march to the Jan Breydel Stadion.

Now there was just one problem with this march. The stadium happens to be an absolute hike out of the town and by now the rain had begun to lash down in biblical proportions. When the masses were letting off flares and having a good sing song on the steps of the Provincial Court this didn't seem like such a problem. Nor was it when fireworks and firecrackers were going off still five minutes into the walk. Around ten minutes in though and we were freezing cold and soaking wet so did what all good Englishman do in those circumstances - snuck off to find yet another pub to "dry off" in. 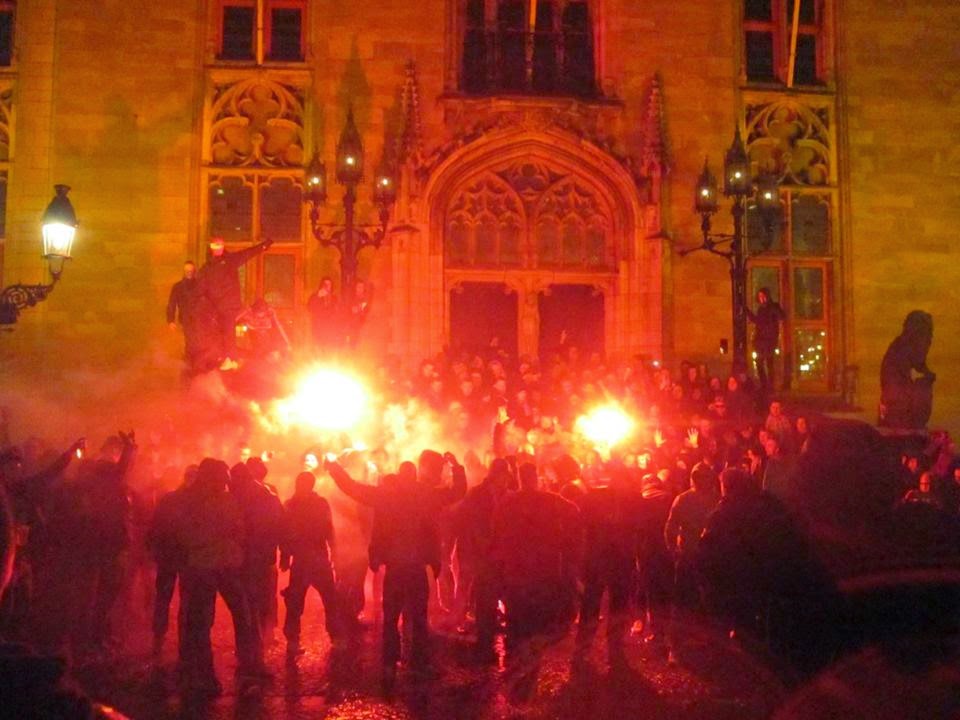 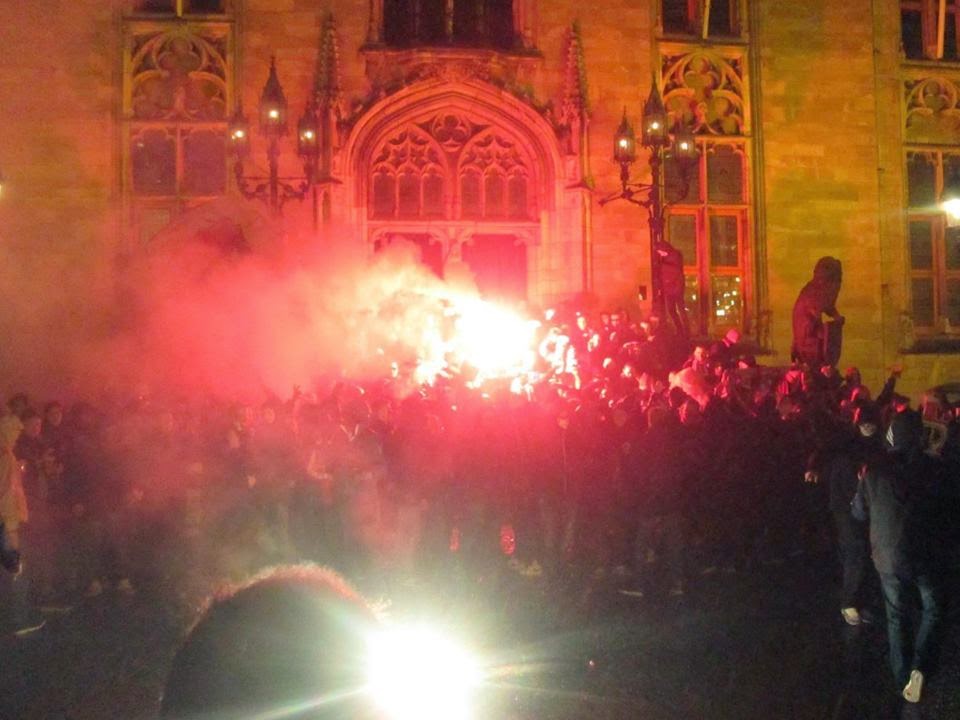 That resulted in our arrival at Jan Breydel Stadion coming via the not-so-ultra means of a bus which thankfully did give more time to sink some beers in the excellent Den Compt Ir outside the ground - so excellent in fact, that we ended up missing the first 10 minutes of the game and returning to said venue for 90 minutes afterwards.

Not that missing the start really mattered. Club Brugge had won the first leg of the tie in Denmark the week previously 3-1 and so were pretty much guaranteed their spot in the last 16 barring some sort of major cock up along the line of the entire squad trying all 147 pints in La Garre pre game. Being the glory hunters we are, as a result the decision was taken to join the home fans despite our honorary membership of the Aalborg supporters club to revel in the inevitable victory.

By full time, that victory had become even more comfortable as Brugge ran out 3-0 winners on the night to take the tie 6-1 on aggregate. The game itself was a pretty terrible spectacle with wind and rain lashing down in which nothing worth remembering happened - or possibly that we remember nothing that happened. Whatever the case, it was a pity given Brugge include among their ranks highly rated Australian goalkeeper Matthew Ryan and it would have been nice to see why he is so well thought of - as it was, he definitely could have sunk several 12 percenters with us beforehand such was his lack of employment throughout the 90 minutes.

Jan Breydel was used when Belgium hosted Euro 2000 alongside the Netherlands and time hasn't been overly kind to it. That adds a certain charm with the floodlights sticking up off the roof earning it big brownie points. It is made up of four separate stands, each two tiered and all seated. The glamour and allure of the Europa League hasn't managed to tempt in the Belgian public seemingly, with 2/3rds of the ground empty. Although for such a dead rubber game, who can blame them for staying in one of the many fine watering holes around the city? They do take the beer seriously.

We took in the first half from a stand down one side which was not serving beer before switching to the end behind the goal for the second. It would be easy to say this was because that was where the Brugge fanatics were gathered, singing songs and going crazy for their side but you'd soon realise what a bare faced lie that was when it was revealed that this was in fact the end - the only end in the ground, seemingly - selling beer.

Once again however alcohol proved its worth as at the end of the game we were in prime position to join in with the Brugge captain leading the fans in a sing-a-long about Bruges being wonderful. It was hard to disagree as they marched on towards the next round of Europe and a date with Besiktas.

With a trip to Liege in the morning, the sensible thing to do at that point would have been to go home and prepare for a second day on the shant in Belgium. Regular readers will know however that there is rarely anything sensible about these trips, which naturally meant the evening ended with more beer and what is becoming the worrying tradition, started in Dortmund last April, of being asked to leave a bar for constantly playing Phil Collins and Easy Lover on a self DJ-ing laptop.

You'd have thought that in a city that bills itself as being a romantic hotspot they would love a bit of Phil. And we were certainly feeling the love back at the hotel bar when we bumped into - you guessed it - our fellow Aalborg fans who, irony of ironies, were staying in the same place.

Joy of joys, more beer needed then and before we knew it, bang, it was 5am. Time, as is so often the case unless you possess a TARDIS, had proven to be against us. Which means that a return visit to Bruges and La Garde is an absolute necessity. There are 144 more beers that need tasting. These things are very serious, don't you know. 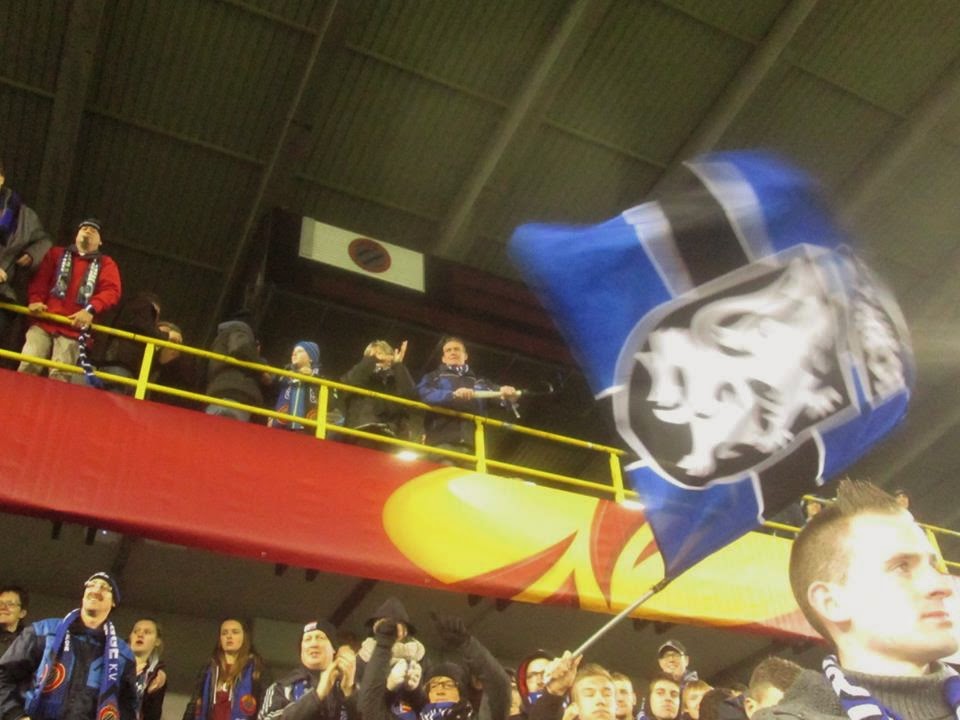 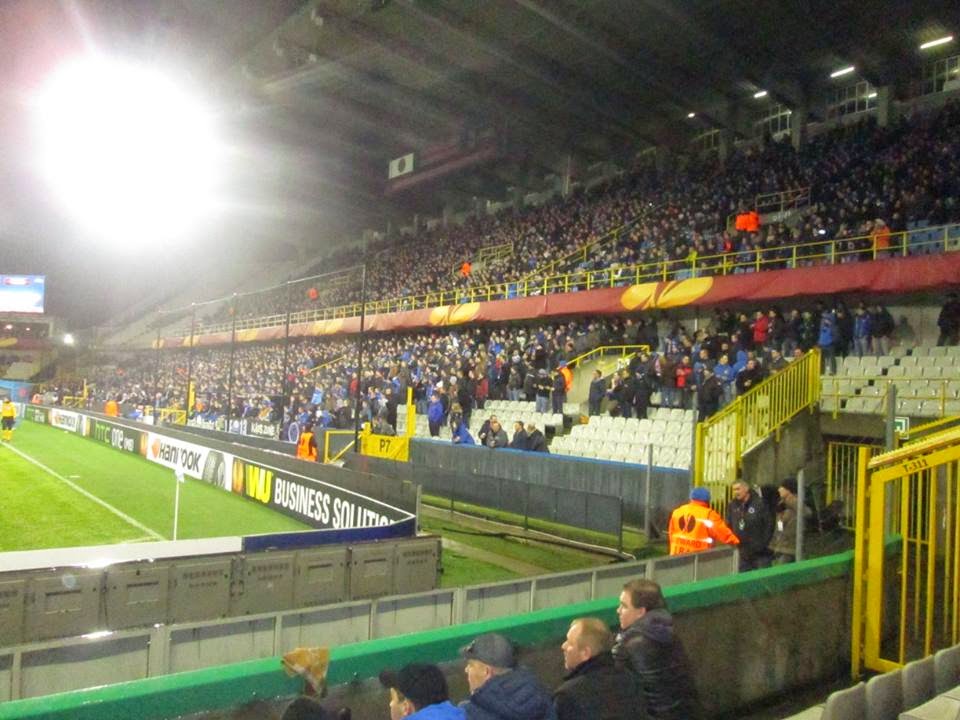 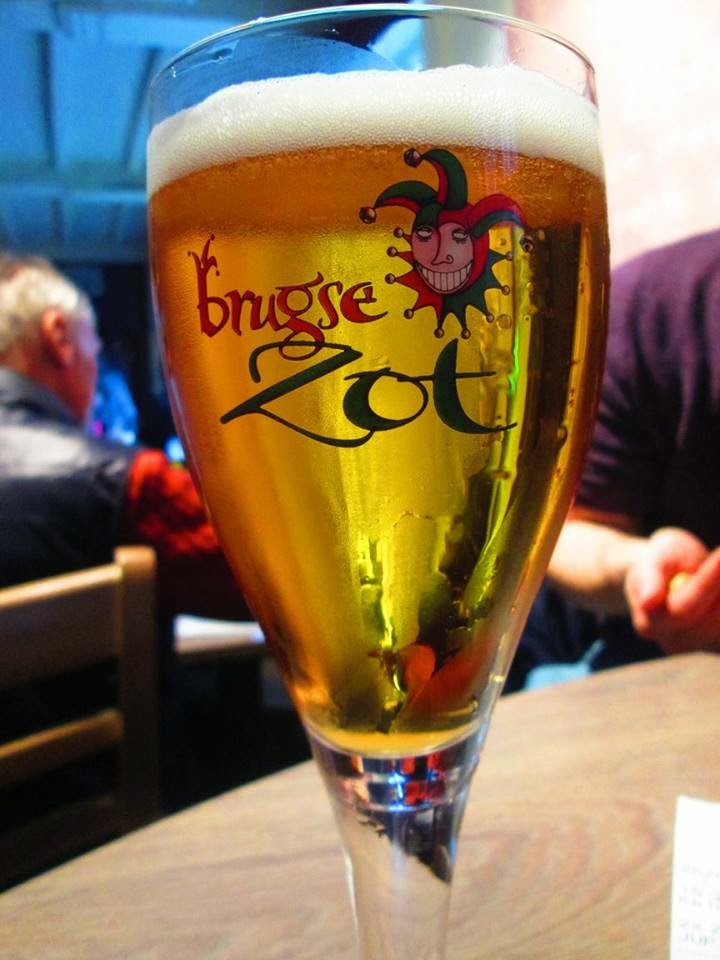