"The fact this bloke keeps serving us 15% beer shows a blatant disregard for how hammered we are getting."

There are plenty of things that you expect when you go to a game of football. Being surrounded by beautiful women is certainly not one of them. So what on Earth was going on at Standard Liege v Cercle Brugge?

You normally get the odd girl that catches the eye at games on the continent. But this was something else. Even the stewards were stunning for crying out loud. The amount of good looking girls was comparitive to what you find at a wedding where everybody without fail always looks good - even Janet Street Poter probably looked gorgeous walking down the aisle.

The amazing standard of lady certainly made for an excellent experience at Liege which was looking far from the case in the hours prior to the game thanks to that old chestnut better known as the hangover. Over 12 hours of strong Belgian beer in Bruges the previous day had left a head that felt like it had been 20 rounds with Mike Tyson but with a fully functioning and remaining ear.

As a result, I'm sure you can imagine just how horrific the two hour train journey down to Liege was. Is there anything more terrible than going backwards on a train that flies around bend after bend while hungover? It turned out there was - a bus journey from the city centre to Stade Maurice Dufrasne in which the driver had no idea of the concept of "slow breaking". And it turned out there was something even worse than that - being given tickets in among the home sides ultras, next to two men with military sized drums and facing two others with megaphones. Poor, poor head.

How does one get over the said hangover? Cheveux du chien, of course which translates (according to Google) as hair of the dog. After that bus journey from hell, we found two little bars outside of the stadium, one called Cup Cafe which was packed with - you've guessed it - beautiful bar staff and another called Bois d'Avoy which was basically a glorified garage converted into a beer facility.

Didn't fancy that? No problem, pick up a crate of beer and join one of the many parties taking place on the steet behind the stadium or on the coaches and buses that had bought fans to the ground. Several drinks later and the perilous state that the previous evening had left yours truly in was beginning to dilapidate.

Until of course we were inside the towering stands of Maurice Dufrasne. And in among those ultras. Flag waving, megaphone shouting, drum banging, weed smoking, beer swilling, jumping and singing ultras. And guess what - there were even some wonderful women in amongst that rabble. Quite the atmosphere among the Liege faithful.

Stade Maurice Dufrasne is a fine venue, being somewhat reminiscent of The Valley - ironic given former Charlton manager Jose Riga is now in the hot seat. It is three tiered on three sides with the bottom two tiers behind either goal consisting of the mythical rail seating that people are so keen to see in English grounds to allow a return to safe standing. The other stand is a two tiered affair while the ground has a modern feel after being largely rebuilt for Euro 2000. It's aged well like a fine wine.
And good news for the Greeks among us - Maurice Dufrasne is a Euro free building! Like many grounds on this part of the continent, they've done what Syriza can only dream of doing and abolished the single currency in favour of Jetons which can be purchased at a very amicable rate and used to purchase beer and waffles inside the stadium.

With Standard pushing for the title and Cercle battling towards the bottom of the table, this game tested the patience of the home support as they saw their side miss chance after chance after chance with Cercle goalkeeper Olivier Werner doing his best to frustrate Standard right up until the 89th minute when the brilliantly named substitute Ricardo Faty nabbed a late late winner much to the delight of the ultras.

But it wasn't to our delight, missing the goal having left for the three mile journey back into the city with five minutes of normal time remaining. 45 minutes later and we were back settled in a bar around the station, a massive structure that looks more like a spaceship than a public transport hub. It was arguably the best station I've ever seen although it is some way outside of the actual centre of Liege - an area we never managed to find ourselves in which is another convenient excuse for a
return visit.

But back to that question that remains unaswered and I can't shake from my mind. Just why were there so many beautiful women at Stade Maurice Dufrasne? It remains a mystery. Answers on a postcard please. 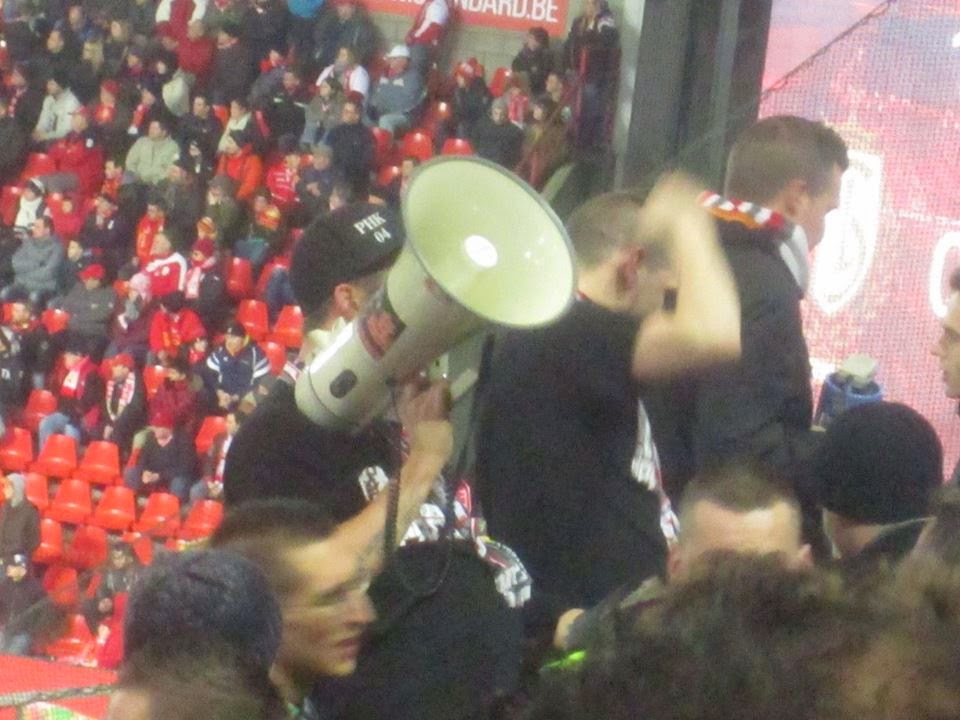 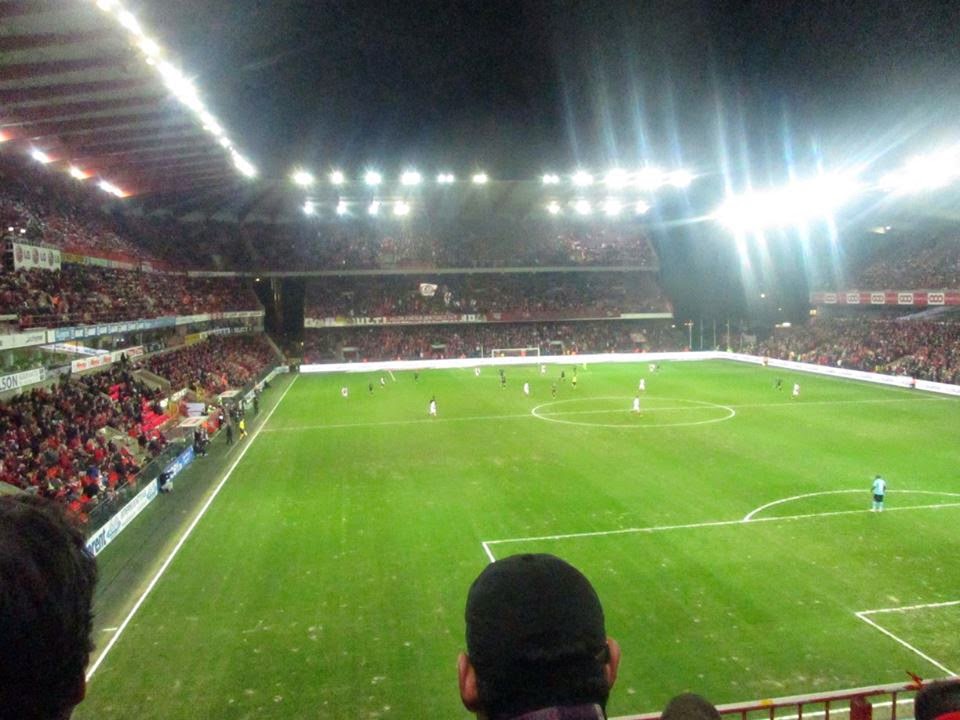 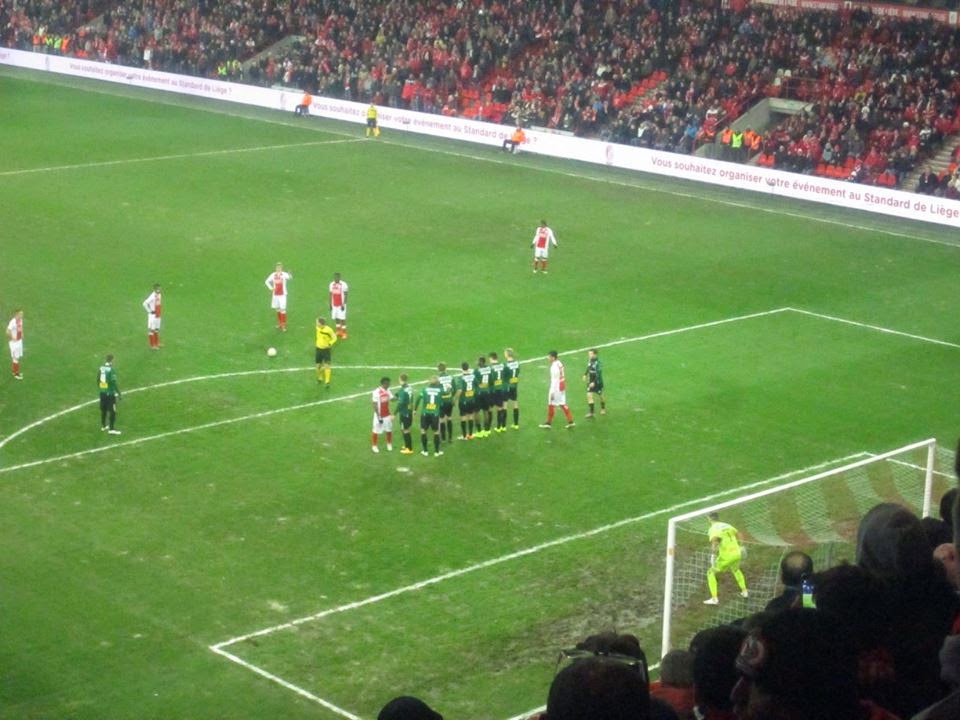