The cycle that English football goes through every two years is a gloriously predictable thing. Not aware of what I am talking about? Well, it goes something like this:

Stage One: Abject performance in a tournament.

Stage Two: Talk of needing to build a young side for the future to gain experience in the next tournament.

Stage Four: Qualification assured, there is an encouraging friendly win against one of the best sides in the world.

Stage Five: Just before the next tournament, optimism is rife as people talk about winning a first trophy since 1966.

Then you go back to Stage One and repeat. Ladies and Gentleman, welcome to Berlin on March 26th 2016 for Stage Four.

This was one of the best England trips of recent memory and it still would be even if there wasn’t such a stirring comeback in a stadium as iconic as the Olympiastadion. Berlin is simply a fantastic city that lives and breathes history. It seems like every time you turn a corner you are greeted by something historic, whether it be a remnant of the wall that divided the western and eastern worlds, the massive television tower at Alexanderplatz lavishly built by the DDR or one of the many sites that played a part in the administration of the Nazi’s.

Of course, that means there is plenty of sightseeing to do which would at least delay arrival in the pub on Friday until dinner time. Having arrived in Berlin at approximately 4pm, that was around four hours – FOUR HOURS - in which no beer was taken. Unheard of on a trip to the Fatherland.

How can somebody spend FOUR HOURS sightseeing I hear you cry. This is how: Firstly, there was the most famous border crossing of the Berlin Wall at Checkpoint Charlie where American’s and Russian’s would stare each other down. Second, the Wall itself which features an excellent exhibition entitled Topography of Terror which details the rise and fall of Adolf Hitler and the Nazi Party on the site of the now demolished SS building. That was an hour alone gone there on a 100 metre strip of fascinating and harrowing wall.

Then you have the Fuehrerbunker which must be the most visited residential carpark in the world,the Memorial to the Murdered Jews of Europe, the Brandenburg Gate, the Reichstag Building and the aforementioned television tower. It’s thirsty work, which is where The Pub came in. Just when you think The Pub With No Name in Tallinn is the most imaginatively named venue in Europe, Berlin tops it with The Pub. It is such a German name - straightforward and efficient. And just like the country we were in, it encouraged beer and plenty of it.

The Pub had a simple premise. Each table had its own set of beer taps from which you poured your own beer. On a big screen, there was a league table which showed how many litres of beer each table had consumed. The basic challenge was drink as much as you can as quickly as you can to get to the top of the league. Table 14 made a slow start to proceedings before coming from nowhere to look like European qualification was on. And with The Pub about to shut, we had our own “AGUEEEERRROOOOOOOOOO” moment to steal top spot with a late necking of several pints. We’re table 14, we’re top of the league!

Game day was no less a subdued affair. There were England fans all over Berlin in places varying from the Irish Bars (why go to Germany and drink in a bloody Irish pub?) to the many pop up bars that you stumble across in squares. It was in one such square that we came across a green beer that looked like it had been made by sticking Bruce Banner in one of those smoothie maker contraptions that are all the rage with health freaks, waiting for him to transform into the Hulk and then blending him down into an alcoholic liquid.

Indeed it did taste a bit like drinking a gamma ray induced mutant that had subsequently been turned into a beer. The first few sips were decent but after that it was akin to drinking nuclear waste. One pint of that was enough so naturally several more pints were needed to cleanse the pallet and then it was onto the Olympiastadion.

There was plenty to do in Olympischer Platz just outside the stadium with bars, a strange double decker bus which had Die Mannschaft’s squad painted on the side and a penalty shootout game whereby lots of young German children had four attempts to get a ball through one of two holes into a goal. Given their panache from spot kicks, it will come as little surprise to hear that most of the children partaking all managed to score with at least one of their efforts.

What will astound, shock and even amaze you is that yours truly having joined the queue also managed to bend one into the bottom corner with his third effort. Target achieved, the fourth penalty was a case of lean back and send it as far away into the crowds as possible which was greeted with lots of “ooooh”, “aaaaaaah” and one excellent cry of “What ze f**k”. With an English man taking it, the gathered masses probably thought it was just another shocking English penalty and not deliberate. But just to confirm that some of us can take penalties, Alastair also slotted one of his efforts into the top corner. We’re both free this summer if you need us, Roy.


In the late 90s with Berlin reunified, there was quite a debate about what to do with the Olympiastadion and the legacy it had from, in particular, the 1936 Olympics when Jesse Owens won four medals in what was supposed to be a games that demonstrated the dominance of the Aryan race. (Interesting fact learnt at the Topography of Terror – Hitler did not refuse to celebrate Owens’ medals, he was asked by the IOC to show neutrality throughout the Games.) Some favoured tearing it down and building a new stadium from scratch, others wanted to slowly let it decay while there was also a strong argument for renovation.


In the end, renovation won the day – all the seats in the stadium are now grey to remind visitors of its dark past - and for this writer this was clearly the right decision as it is now a superb modern arena with a fantastic atmosphere. It hasn’t lost its soul, you can feel history oozing out of the magnificent outer stone walls and great feats are still being recorded there to this day with the current 100m world record from Usain Bolt set in 2009 at the very top of that list. It is a glowing vindication of the theory that old stadiums are always the best, certainly in comparison to the sort of soulless corporate bowl that Wembley has become since it’s own rebuild.

You expect England fans to be in fine voice wherever they travel but a whole day on the beer, a 9pm local time kick off and a packed away end ensured that this was good even by the Three Lions travelling supports high standards. One particular highlight was at the end of the game when some genius decided to play Monty Python’s ‘Always Look on the Bright Side of Life’ over the tannoy with both away and home fans singing along in unison, no one wanting to leave.


As for the game, well it was a classic. 2-0 down to goals from Toni Kroos and Mario Gomez, goals from Harry Kane, Jamie Vardy and Eric Dier right at the death secured a huge win. Each goal was greeted with wilder celebrations, more beer going flying as pints were launched in joy and so much noise that by the time Dier struck the third you half expected the Olympic Bell just through the Marathon Arch adjacent to the England section to start ringing as a result.

When we did eventually manage to drag ourselves away into the Berlin night it was time for more beer and to thank this wonderful place for being an outstanding city before talk somewhat predictably rolled round to Stage Five of the England cycle. Firstly we had to explain to Lauren who was making her away debut that not every trip - in fact, probably one every 15 years - has that sort of excitement packed into it. But then even us hardened followers of England began to wonder. If we can beat the world champions like that in their own backyard, could we do it again in Paris on July 10th?

Don’t worry, we’ll be back to Stage One by then. 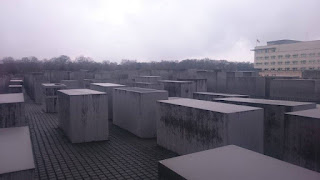 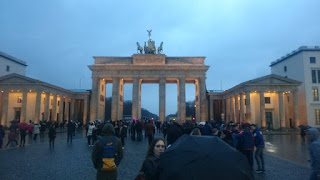 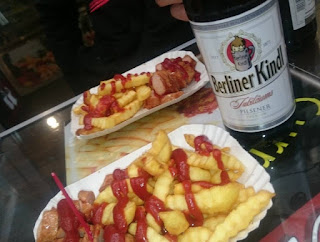 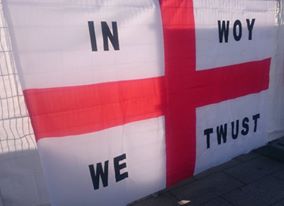 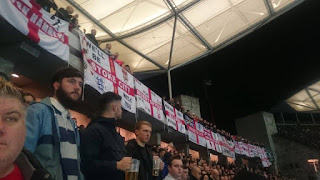