"You had your match ticket stolen? Do not worry, we will buy you the beers"

If, at the start of just the second Champions League campaign in Wolfsburg's history, you had have said, "I reckon we'll be watching them in the second leg of quarter finals against Real Madrid at the Santiago Bernabeu with a 2-0 lead", then you'd more than likely have been sectioned.

Well, there is no need to section me as I never actually got to watch the game at the famous Bernabeu. Yes, I had a ticket for what was all set to be one of the biggest nights in Die Wolfe's history. But with 30 minutes to go before kick off, that ticket along with the rest of the contents of my wallet was pickpocketed away in a mass crush outside the stadium.

Let’s lay our cards on the table here – I don’t really like Spain that much. Never have done. There isn’t one particular reason why but on previous visits to Valencia and Barcelona, I’ve just never got why holidaymakers are so keen to flock there.

Madrid was, however, slowly turning that view around. We found plenty of good pubs across the city, the people were friendly and anywhere that offers you a free plate of food when you buy a beer is always likely to make it onto the good venue list. It’s what has always counted in Italy’s favour, after all.

The fact we didn’t even have anywhere to stay didn’t seem like an inconvenience in the run up to the game. Nor the fact that it spent most of the day raining, which mean that we would be sleeping in Madrid airport afterwards in soaking wet clothes.

The feelgood factor of the trip started the moment we arrived at the Bernabeu for a cursory look around in the morning. Like it’s other famous Spanish stadium counterpart Camp Nou, it appears to be a tourist attraction first, football ground second. Even though this was a match day and there were no doubt countless things going on inside to ensure the ground was ready for action, thousands of tourists had flocked there to visit the Madrid Megastore which was more akin to a department store than a football club shop and to take the ground tour.

From the outside, it was mightily impressive. A huge concrete structure looming over busy roads. Despite it’s size, it is in such a densely built up area that until you are stood next to it, you can’t actually see it. It just appears from nowhere which adds to the mystique and grandness of the place. If it is that impressive from the outside, imagine how good it will be from the inside? Well, I never got to find out.

After that saunter around, it was back to the city centre and to the Wolfsburg meet point for some beers with our fellow Die Wolfe fans. Despite holding a 2-0 lead from the first leg, most were approaching the evening game with a sense of trepidation and not many were expecting, come 11pm local time, for their side to be in the last four of Europe’s premier knockout competition. That didn’t stop the party though, a large crowd assembling in Plaza de Santa Ana under the careful watch of the local police for a sing song and the customary pre match drinks, after which it was back off to the ground.

It was when passing under one of the four giant entrance tunnels that are dotted on each corner of the Bernabeu that the pickpocketing incident happened. These funnel people into a remarkably small area, around 10 people wide which with 75,000 odd fighting their way in can lead to an almighty crush. Entering this almighty crush, the wallet was safely stored in the front pocket. Exiting this almighty crush, it was gone – nowhere to be seen on the floor and seemingly not handed in anywhere.

So what do you do when you’ve lost the entire contents of your wallet and €75 worth of match ticket? Firstly, you tell your companion to go. Andy didn’t need telling twice and he disappeared with the agreement that we would meet up at the airport afterwards. Secondly, you find somewhere to watch the game.

All around the Bernabeu’s little side streets are small kebab shop type places that feature big screen televisions. They are also serve beer and it is to these that the local supporters who have been priced out of going to games come to watch their team. They are absolutely heaving and so I settled into one of these, sheltered out of the rain, to catch what could be an historic night for Wolfsburg.

One young girl of no more than 15 was soon intrigued as to what I, an Englishman in a Wolfsburg shirt, was doing watching the game in this café with her and around 100 Madrid supporters. And so I explained pickpocketgate, after which she took pity on me and said not to worry, her and her group of friends numbering four who must surely have all had school the next morning would buy me beers to make up for it. Her English needed improving and she was sorry about what happened.

Now in most situations, taking beer off a 15-year-old girl would be a pretty grey area but, this being Spain with its liberal approach to life meant that I didn’t think twice about thanking her and instantly found a pint of Mahou thrust into my hand by one of her friends. Their pity grew as Cristiano Ronaldo showed just why he is the best player in the world with a hat-trick to fire Real into the semi finals thanks to a 3-0 win. Not only had this poor English Wolfsburg fan had his match ticket stolen, but he had also seen his side blow a 2-0 first leg lead. Let’s get him some more beers.

Eventually, I had to drag myself away from the happy party and head back to the airport for some sleep ahead of the 7am flight home. Such was the ferocity of the rain that even the 10 minute walk to the metro station left me utterly drenched. Thankfully, Madrid Airport had taken soaked passengers sleeping in their facility into account and installed the most powerful hand dryers available in the gents which were soon being used by the multitude of Wolfsburg fans all spending the night at the airport to dry out their clothes.

Soaked, robbed and despondent. Was this then the final nail in Spain’s coffin? Well why it may have been a totally pointless trip in footballing terms, that didn’t make it any less enjoyable. And sorry Mr Farrage – I may have been pickpocketed by one of these nasty foreigners you keep warning us about, but I won’t be voting to leave the EU anytime soon. You can thank the friendly local girls and the Mahou for that. 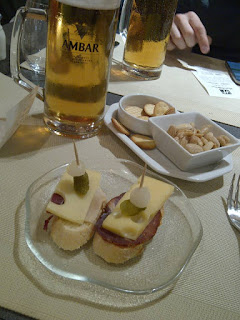 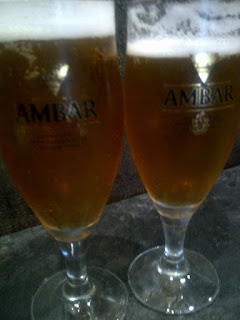